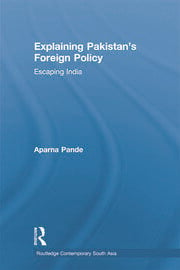 Pakistan has over the decades become a hotbed for the terrorist ideology often referred to as Jihadism. This book investigates the underlying principles of Pakistan’s foreign policy from 1947 until the present day, and explains the rise of Jihadism as an offshoot of Pakistan’s security concerns.

The book goes on to discuss that from its inception as a separate state, Pakistan’s foreign policy focused on ‘seeking parity’ with India and ‘escaping’ from an Indian South Asian identity. The desire to achieve parity with its much larger neighbour led Pakistan to seek the assistance and support of allies. The author analyses the relationship Pakistan has with Afghanistan, United States, China and the Muslim world, and looks at how these relationships are based on the desire that military, economic and diplomatic aid from these countries would bolster Pakistan’s meagre resources in countering Indian economic and military strength. The book presents an interesting contribution to South Asian Studies, as well as studies on International Relations and Foreign Policy.

Aparna Pande is a Research Fellow at the Hudson Institute in Washington DC, USA. She has a doctorate in Political Science from Boston University and her main research interest is International Relations focusing on South Asia.

"[A]rguably the best guide to understanding Pakistan’s view of India and the world... her presentation of Pakistan’s own narrative is of great value for the Indian political class and the strategic community in developing a more successful strategy towards our very special neighbour to the west." - C. Raja Mohan, Border Forces; indianexpress.com

"Pande’s Explaining Pakistan’s Foreign Policy: Escaping India is a worthy read. An accessible academic text, Pande’s book describes the logic and evolution of Pakistan’s foreign policy, showing how much of it is grounded in pre-Partition tensions between the Muslim League and Congress. She shows how India’s Muslim elite constructed an Islamic identity to differentiate themselves from “Hindu” India in order to buttress the two-nation theory. To some extent, Pande’s task is easy, since few will deny her basic argument that Pakistan’s foreign policy is India-centric. Her choice to revisit the historical underpinnings of that India-centricity is what makes the book an interesting read... Pande’s account is ultimately a balanced review of Pakistan’s foreign policy imperatives that simultaneously justifies Islamabad’s concerns while highlighting the fallout of clinging to them too closely." - Huma Yusuf; Dawn Magazine, September 18, 2011

"Offering a comprehensive and probing analysis of the country’s foreign policy since 1947, Pande, a South Asia scholar and analyst, describes how Pakistanis have constructed their national identity and how closely it is tied to their views of national survival." - Dr. Marvin G. Weinbaum,Director of the Center for Pakistan Studies at the Middle East Institute; The Middle East Journal (Vol. 65, No. 4)

"Aparna Pande’s excellent book, Explaining Pakistan’s Foreign Policy: Escaping India, is a must read for Indian travellers to Pakistan who tend to gush to the locals, “You know, this is just like India, we don’t feel like we’ve come to another country”, and then feel perplexed by the Lahori’s cold response... a carefully researched historical analysis that traces the crafting of our neighbour’s national identity, from the time that the Muslim League convinced itself that a nation could be constructed on the basis of a shared religious identity, with Islam substituting for nationalism." - Ajai Shukla; Business Standard, June 27th 2012