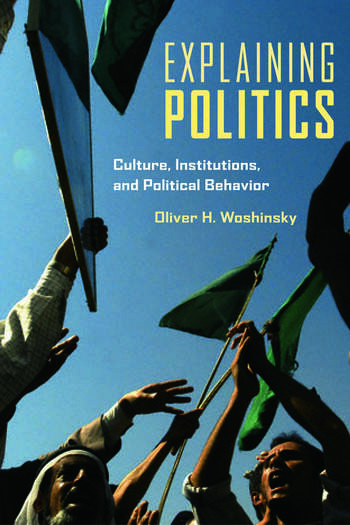 This unique text offers a comprehensive overview of who participates in politics and why, how social and political institutions shape that involvement, and, ultimately, what form citizen political participation takes. Drawing on a multitude of factors to explain politics and political behaviour, Woshinsky shows that political outcomes depend on a complex interplay between individuals and their environment. Psychology, personality, and ideology, together with culture, institutions, and social context shape political behaviour. Explaining Politics offers a wealth of comparative examples and practical applications through a lively and engaging narrative.

Oliver H. Woshinsky is Professor Emeritus at the University of Southern Maine and author of several previous books. He has taught undergraduates for over three decades and has lived and taught in France, Russia, and Great Britain.

"Woshinsky’s book is unsurpassed in its ability to communicate basic concepts in political theory and in American politics to the undergraduate student. It is clearly written, and even entertaining in its presentation of examples and anecdotes which neatly illustrate abstract ideas. Explaining Politics is sure to provoke lively classroom discussion about fundamental political ideas." - Andrew S. McFarland, Professor of Political Science, University of Illinois at Chicago

"Explaining Politics combines a simple but powerful analytical framework for understanding political behavior with informal, direct, and clear writing that will engage students who possess little background or interest in politics.  Woshinsky unfailingly illustrates complex ideas and concepts (culture, personality, conflict) with interesting and appropriate examples that his readers will understand.  This book succeeds uncommonly well in achieving its goal of providing students with the tools needed to understand politics and to become thinking citizens." - James Eisenstein, Professor Emeritus of Political Science, Pennsylvania State University

"This engaging text uses historical and contemporary scenarios to develop a simple, yet profound, thesis. Political behavior and its consequences are a function of the personalities of the actors and environments in which the actions take place. Each chapter exudes the enthusiasm and love of democratic politics that Woshinsky has imparted to students and colleagues over more than forty years as a teacher and scholar. A deliciously written introduction to politics and political science!" - Michael Margolis, University of Cincinnati

"Oliver Woshinsky has written an introduction to the study of politics that starts from a relatively simple but powerful premise: politics is a human activity. From this simple premise, he develops an engaging and comprehensive review of the structures, processes, ideas and actors involved in politics. Anyone who considers the human aspect of politics to be integral to the development of an understanding of how it proceeds will want to adopt this book for their courses. And students will want to read it for its deft combination of a realistic portrayal of the practice of politics with a comprehensive and focussed review of its study." - Brenda O’Neill, University of Calgary