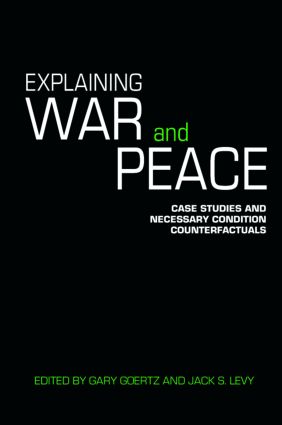 This edited volume focuses on the use of ‘necessary condition counterfactuals’ in explaining two key events in twentieth century history, the origins of the First World War and the end of the Cold War.

Containing essays by leading figures in the field, this book analyzes the causal logics of necessary and sufficient conditions, demonstrates the variety of different ways in which necessary condition counterfactuals are used to explain the causes of individual events, and identifies errors commonly made in applying this form of causal logic to individual events. It includes discussions of causal chains, contingency, critical junctures, and ‘powder keg’ explanations, and the role of necessary conditions in each.

Explaining War and Peace will be of great interest to students of qualitative analysis, the First World War, the Cold War, international history and international relations theory in general.

'…an impressive collection of essays that survey the ways in which necessary conditions counterfactuals are used in the logics of causal explanation, particularly in explanations of international conflict. The work represents an important contribution to the study of methods in general and usefully develops some central concepts in qualitative research. The substantive focus also helps to elucidate the more abstract theoretical discussions.'

Jack S. Levy is Board of Governors' Professor of Political Science at Rutgers University, President of the International Studies Association (2007-2008), and author of War in the Modern Great Power System 1495-1975. He has also written numerous articles on the causes of war and on decision-making.

Gary Goertz is Professor of Political Science at the University of Arizona. He is the author or co-author of five books and over 25 articles on issues of methodology, international institutions, and conflict studies, including "Necessary Conditions: Theory, Methodology, and Applications," (2003 Rowman & Littlefield) and "Social Science Concepts: A User's Guide" (2006 Princeton University Press).