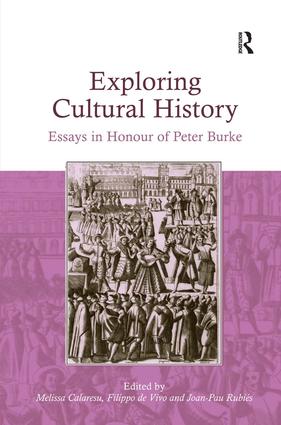 Over the past 30 years, cultural history has moved from the periphery to the centre of historical studies, profoundly influencing the way we look at and analyze all aspects of the past. In this volume, a distinguished group of international historians has come together to consider the rise of cultural history in general, and to highlight the particular role played in this rise by Peter Burke, the first professor of Cultural History at the University of Cambridge and one of the most prolific and influential authors in the field. Reflecting the many and varied interests of Peter Burke, the essays in this volume cover a broad range of topics, geographies and chronologies. Grouped into four sections, 'Historical Anthropology', 'Politics and Communication', 'Images' and 'Cultural Encounters', the collection explores the boundaries and possibilities of cultural history; each essay presenting an opportunity to engage with the wider issues of the methods and problems of cultural history, and with Peter Burke's contributions to each chosen theme. Taken as a whole the collection shows how cultural history has enriched the ways in which we understand the traditional fields of political, economic, literary and military history, and permeates much of what we now understand as social history. It also demonstrates how cultural history is now at the heart of the coming together of traditional disciplines, providing a meeting ground for a variety of interests and methodologies. Offering a wide international perspective, this volume complements another Ashgate publication, Popular Culture in Early Modern England, which focuses on Peter Burke's influence on the study of popular culture in English history.

’Clearly, the ’new cultural history’ has moved on from its beginnings as a stepchild of the social history of the Sixties and Seventies. This fine volume gives a vivid sense of its present concerns and resources. At the same time it helps explain why Peter Burke is regarded as belonging to the handful of scholars, including Natalie Davis, Carlo Ginzburg, and Roger Chartier, who have done the most to help cultural history move forward, by exploring both old and new questions, and by venturing suggestive if provisional answers.’ English Historical Review 'There is a lot to digest here and the variety of the chapters means that the collection represents good value and is more than just the sum of its parts. The editors are to be congratulated for putting together a festschrift which reflects the interests and preoccupations of an outstanding scholar while also showcasing the influence Burke’s scholarship has had on generations of cultural historians since the 1960s.' Annual Bulletin of Historical Literature

Joan-Pau Rubiés is Reader in International History at the London School of Economics and Political Science, UK. Filippo de Vivo is Senior Lecturer in Early Modern History at Birkbeck College, University of London, UK. Melissa Calaresu is the McKendrick Lecturer in History at Gonville and Caius College, Cambridge, UK.