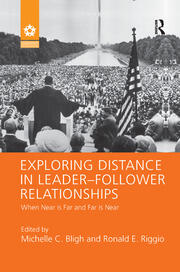 Exploring Distance in Leader-Follower Relationships: When Near is Far and Far is Near

Leaders face new challenges as they cope with changes in culture, technology and the workplace. In this edited volume, based on a conference at Claremont, scholars of leadership studies from three continents discuss the latest psychological research on interpersonal leader–follower relations. The book tackles the impact of distance – physical, interpersonal and social – on our organizations, governments and societies.

Bligh, Riggio, Introduction to Exploring Distance in Leader-Follower Relationships: When Near is Far and Far is Near. Part I: Foundations and Definitions of Distance. Lisk, Lewandowski, Foundation of Distance. Shamir, Notes on Distance and Leadership. Part 2: The Impact of Distance on Leader-Follower Relations. Kahai, Leading in a Digital Age: What's Different, Issues Raised, And What We Know. Reichard, Serrano, Wefald, Engaging Followers At a Distance: Leadership Approaches That Work. Schyns, The Role of Distance in Leader-Member Exchange (LMX). Antonakis, Jacquart,  The Far Side of Leadership: Rather Difficult to Face.  Part 3: Moving Forward Emerging Concepts and Extensions of Leader-Follower Distance. Eagly, Women as Leaders: Paths Through the Labyrinth.Rast, Gaffney, Hogg, The Tyranny of Normative Distance: A Social Identity Account of the Exercise of Power by Remote Leaders. Razin, Kark, The Apple Does Not Fall Far From the Tree: Steve Jobs's Leadership as Simultaneously Distant and Close. Hollander, American Presidential Leadership: Leader Credit, Follower Inclusion, and Obama's Turn.

"Defining and redefining the role of distance this collection is the new go-to reference for understanding how distance impacts leader-follower relationships.  Scholars and practitioners alike will find the progression from foundations to state-of-the-art an accessible and deeply grounded read by a collection of world class scholars." - Kevin B. Lowe, Associate Editor, The Leadership Quarterly, University of North Carolina at Greensboro

"Leadership is a domain in which increasing technology is having a significant impact. We can anticipate that communication via technology will continue to increase, likely more rapidly than we can imagine. This book, which examines leadership at a distance and its many ramifications is a must read for all managers. Never again will leaders be able to rely solely on face-to-face interactions. This book helps us understand the myriad of implications distance, in its many forms, can and will have on the practice of leadership. Bligh and Riggio have produced an exceptional book that is heavily grounded in research and written by eminent leadership scholars. This is a book that will be a great resource for leadership practice, leadership scholars and faculty teaching graduate level courses." - Leanne Atwater, Chairperson and Professor, Department of Management, University of Houston

"Globalization has changed how we perceive and interact with time, space and distance.  This book offers a refreshing perspective on the concept of distance in leadership.  Building on various theoretical constructs the authors explore the impact and innovative perspectives on the important and emerging role distance plays in both the study and practice of  leadership.  It is a must-read book for all with a professional interest in leadership."- Cynthia Cherrey, President, International Leadership Association

"Leadership at a distance is a very important but greatly under-discussed topic—until now! Michelle Bligh and Ron Riggio have brought together the best and the brightest to explore distance—physical, interpersonal, and social—in leader-follower relations and produce a compendium that both reviews the state of the art and science as well as sets the research agenda for the next decade and beyond. The expert authors, with their cutting edge work from a variety of theoretical perspectives, offer a close-up view of distance in leadership as never before in organizations, government, and virtual worlds. The editors and authors, knowledgeable both in research and professional practice, have brought focus to the heretofore cloudy topic of distance and leadership making what was far indeed now appear near. This book is a must-read for, and a required part of, any serious leadership researcher’s or professional’s book shelf or e-reader. Enjoy!" - Francis J. Yammarino, Ph.D., Binghamton University, USA