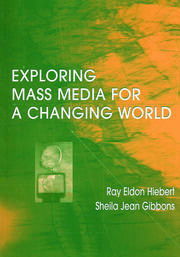 Beautifully written and class tested, Exploring Mass Media for a Changing World provides a comprehensive but modestly priced text around which instructors can develop a customized teaching package. Written for introductory courses, it covers essential information students need in order to understand the media, the mass communication process, and the role of media in society. It summarizes basic, generally agreed-upon principles, theories, significant historical events, and essential facts, but does so in a tightly written, readable style. Taken together, this information can be thought of as a minimum repertoire that all citizens of the "information age" need in order to become literate consumers and users of mass communication.

Features include:
*Historical Framework--For ease of comprehension, media processes and individual media are placed in historical context to show their technological evolution and the effects of those changes on society.
*Organization--The first seven chapters deal with the evolution of communication theories and processes common to all media. The next five deal with specific media in the chronological order in which they became mass media. Chapters 13 and 14 introduce two non-media institutions (advertising and public relations) whose exploration is essential in order to understand how mass media functions in our society. Finally, chapter 15 returns to the theme of technological evolution and its effects on society with an in-depth discussion of the internet.
*Flexibility--Because it is concise, affordable, and comprehensive, it can be used either as a stand-alone text in mass media courses or as part of an instructional package in courses where mass communication is one of several major units.
*Themes--The following themes are introduced early and carried throughout: (a) the evolution of media technology and its effects on society, (b) the global and culture-bound characteristics of mass media, and (c) the need for media literacy in the 21st century.
*Supplements--An accompanying instructor's manual begins with a chapter-length essay on teaching the mass media course then offers the following items for each chapter: topical outline and key vocabulary; key ideas to be emphasized and pitfalls to be avoided; discussion questions; objective and essay test items; and both print and nonprint resources for further study.