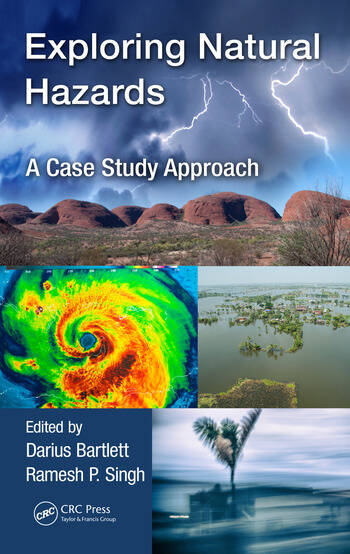 The Sendai Framework for Disaster Risk Reduction 2015–2030 has identified four priority areas for Disaster Risk Reduction: understanding disaster risk; strengthening disaster risk governance to manage disaster risk; investing in disaster risk reduction for resilience and enhancing disaster preparedness for effective response; and to "Build Back Better" in recovery, rehabilitation and reconstruction. Although tremendous progress has been made in recent decades in understanding the workings of the Earth systems and, in particular, its impacts on and responses to human actions, there remains a continuing and pressing need for knowledge that will allow society to simultaneously reduce exposure to global environmental hazards, while also meeting economic development goals. Exploring Natural Hazards: A Case Study Approach, contributes to the knowledge showcasing advanced practices for the monitoring of natural hazards.

Through each case study, the book examines mainly hazards arising from processes within the hydrosphere and atmosphere, triggered or exacerbated by inputs to and transfers of energy between environmental components. It discusses the causes of these phenomena, and ways in which improved policy making, sometimes coupled with the application of appropriate modern technologies, can help to reduce people’s exposure to harm.

Discussing challenges, lessons learned and recommendations, this book provides a snapshot of issues related to tropical cyclones and typhoons, desertification, floods, lightning as a hazard and the need for alert systems. It is a valuable resource for practitioners and professionals alike, for researchers, students and others who work at the intersection between environmental hazards, sustainable development and social justice.

Darius Bartlett is an Earth Scientist and geomorphologist by training, with particular specialism in GIS and the application of geoinformation technologies to coastal zone science. Now retired from active teaching, he is currently researching sites of possible historical tsunami impacts on the coast of Ireland. He is the co-editor of Marine and Coastal Geographical Information Systems (with Dawn Wright. Taylor and Francis: 2000), GIS for Coastal Zone Management (With Jennifer Smith, CRC Press: 2005) and Geoinformatics for Marine and Coastal Management (With Louis Celliers, CRC Press: 2017).

Ramesh P. Singh, Ph.D., Professor, School of Life and Environmental Sciences, Chapman University, Orange, California, USA since 2009. He completed his graduation from Banaras Hindu University, Varanasi, India, MS in Solid Earth Geophysics in 1976 and Ph.D. in 1980. He was Post-doctoral and AOSTRA Fellow with the Department of Physics, University of Alberta, Canada during 1981-1986. He joined Department of Civil Engineering, Indian Institute of Technology (IIT), Kanpur, India as a Faculty member during 1986-2007. At IIT Kanpur he taught Geoscience and Remote Sensing courses at the undergraduate and post graduate levels. Dr. Singh joined George Mason University (GMU) as a Distinguished Visiting Professor during 2003-2005 and later on as Full Professor in 2007 until 2009. He moved to Chapman University, Orange, California, USA where he is continuing as of 2009.