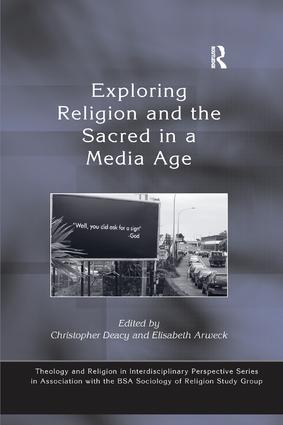 Exploring Religion and the Sacred in a Media Age

In recent years, there has been growing awareness across a range of academic disciplines of the value of exploring issues of religion and the sacred in relation to cultures of everyday life. Exploring Religion and the Sacred in a Media Age offers inter-disciplinary perspectives drawing from theology, religious studies, media studies, cultural studies, film studies, sociology and anthropology. Combining theoretical frameworks for the analysis of religion, media and popular culture, with focused international case studies of particular texts, practices, communities and audiences, the authors examine topics such as media rituals, marketing strategies, empirical investigations of audience testimony, and the influence of religion on music, reality television and the internet. Both academically rigorous and of interest to a wider readership, this book offers a wide range of fascinating explorations at the cutting edge of many contemporary debates in sociology, religion and media, including chapters on the way evangelical groups in America have made use of The Da Vinci Code and on the influences of religion on British club culture and electronic dance music.

’This collection hums with intellectual energy and the chapters are well written and accessible. The book aims ’’to ensure that a more multi-faceted and creative engagement with religion is on offer’’ and, in my opinion, it succeeds. It brings together some of the animating ideas regarding the intersections of religion, the media, and popular culture and is a recommended scholarly resource for both undergraduate and postgraduate students.’ Journal of Contemporary Religion ’This text has much to add to the conversation, and much to say to both scholars and practitioners alike about the influence of the media age on our understanding of religion and the sacred.’ Literature and Theology ’The title is recommended to all graduate students of religion and media, and will be a good resource material for all those interested in a multifaceted and interdisciplinary assessment of the creative engagement of the media with spirituality and in the emerging field of Religion and Film.’ Journal of Muslim Minority Affairs

Contents: Introduction: why study religion and popular culture?, Chris Deacy; The ethics of research in faith and culture: scholarships as fandom?, Tom Beaudoin; Media rituals: from Durkheim on religion to Jade Goody on religious toleration, Nick Couldry; Deepening relationships with material artefacts, Stephen Pattison; Contesting martyrdom, Jolyon Mitchell; Religionless in Seattle, Michael W. DeLashmutt; Marketing God and Hell: strategies, tactics and textual poaching, Carlton Johnstone; The gospel of Tom (Hanks): American churches and The Da Vinci Code, Ellen E. Moore; From pulp fiction to revealed text: a study of the role of the text in the otherkin community, Danielle Kirby; Seeing the self as other: televising religious experience, Nicholas Buxton; Possession trance ritual in electronic dance music culture: a popular ritual technology for reenchantment, addressing the crisis of the homeless self, and reinserting the individual into the community, Rupert Till; Representation of religion in Pretty Village, Pretty Flame, Milja Radovic; A secular gospel for the marginal: the films of Stephen Chow as Hong Kong cinematic parables, Yam Chi-Keung; What is 'on': an exploration of iconographical representation of traditional religious organizations on the homepages of their websites, Sarah Lawther; Researching theo(b)logy: emerging Christian communities and the internet, Katharine Sarah Moody; Index.

Chris Deacy is Head of Religious Studies at the University of Kent, where he specialises in Applied Theology. His first book, Screen Christologies: Redemption and the Medium of Film, was based on his doctoral thesis and published by the University of Wales Press in 2001. His 2005 publication, Faith in Film: Religious Themes in Contemporary Cinema, published by Ashgate, was the product of a two-year Special Research Fellowship from the Leverhulme Trust. In 2008, Blackwell published Chris's latest book, co-authored with Gaye Ortiz, Theology and Film: Challenging the Sacred/Secular Divide, which focuses upon a number of theoretical and methodological questions that arise in the area of theology and film before applying many of these insights to a range of theological perspectives and filmic themes, including violence, justice and eschatology. Chris is a member of INTERFILM, the American Academy of Religion (AAR) and the UK Theology, Religion & Popular Culture Network Group. Elisabeth Arweck is Senior Research Fellow at the University of Warwick (Institute of Education). She is a member of a range of national and international learned societies in religious studies and the sociology of religion and is a Council member of the International Society for the Sociology of Religion. Elisabeth is an editor of the Journal of Contemporary Religion. She has co-edited a number of volumes, including Reading Religion in Text and Context: Reflections of Faith and Practice in Religious Materials (with Peter Collins) (Ashgate, 2006), Materialising Religion: Expression, Performance and Ritual (with William Keenan) (Ashgate, 2006), and Theorising Faith: The Insider/Outsider Problem in the Study of Ritual (with Martin Stringer) (Birmingham University Press, 2002). She is author of Researching New Religious Movements in the West: Responses & Redefinitions (Routledge, 2007) and co-author (with Peter Clarke) of New Religious Movements in Western Europe: An Annotated Bibliography (Greenwood Press, 1997). She has published a number of articles in journals (with Eleanor Nesbitt), book chapters, and entries in handbooks and encyclopaedias.