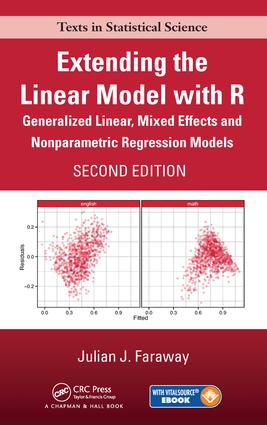 Extending the Linear Model with R

Since the publication of the bestselling, highly recommended first edition, R has considerably expanded both in popularity and in the number of packages available. Extending the Linear Model with R: Generalized Linear, Mixed Effects and Nonparametric Regression Models, Second Edition takes advantage of the greater functionality now available in R and substantially revises and adds several topics.

New to the Second Edition

Demonstrates the Interplay of Theory and Practice

This textbook continues to cover a range of techniques that grow from the linear regression model. It presents three extensions to the linear framework: GLMs, mixed effect models, and nonparametric regression models. The book explains data analysis using real examples and includes all the R commands necessary to reproduce the analyses.

"What I liked most with this book was the comprehensive treatment of the practical application of GLMs, covering most outcomes an applied statistician will encounter, and at the same time presenting just enough of the necessary theoretical basis for the discussed methods. Combined with the thorough discussion of the R output, the text will serve as a useful guide for the reader when applying the methods to his or her own data set."

"The second edition of book ‘Extending the linear model with R’ by Julian Faraway is an easily readable and relatively thorough (without being theory heavy) sequel of the earlier ‘Linear Models with R’ by the same author. The book itself is written in a self-paced tutorial style in easily digestible chunks integrating descriptions of underlying methodology, with data analysis and R code. The organization of the book is well thought through. The flow of the book is problem driven rather than driven by the underlying statistical theory . . . the second edition is more polished in terms of the figures used, R code and output display and a crisper typesetting of equations."

"… well-written and the discussions are easy to follow … very useful as a reference book for applied statisticians and would also serve well as a textbook for students graduating in statistics."

"The text is well organized and carefully written … provides an overview of many modern statistical methodologies and their applications to real data using software. This makes it a useful text for practitioners and graduate students alike."

"I enjoyed this text as much as [Faraway’s Linear Models with R]. The book is recommended as a textbook for a computational statistical and data mining course including GLMs and non-parametric regression, and will also be of great value to the applied statistician whose statistical programming environment of choice is R."

"This is a very pleasant book to read. It clearly demonstrates the different methods available and in which situations each one applies. It covers almost all of the standard topics beyond linear models that a graduate student in statistics should know. It also includes discussion of topics such as model diagnostics, rarely addressed in books of this type. The presentation incorporates an abundance of well-chosen examples … this book is highly recommended …"

"It has been a great pleasure to review this book, which delivers both a readily accessible and reader-friendly account of a wide range of statistical models in the context of R software. Since the publication of the very well received first edition of the book, R has considerably expanded both in popularity and in the number of packages available. The second editionof the book takes advantage of the greater functionality available now in R, and substantially revises and adds several new topics."

Joint Modeling of the Mean and Dispersion

Appendix B: About R

Julian J. Faraway is a professor of statistics in the Department of Mathematical Sciences at the University of Bath. His research focuses on the analysis of functional and shape data with particular application to the modeling of human motion. He earned a PhD in statistics from the University of California, Berkeley.