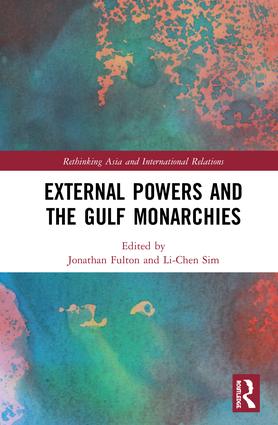 External Powers and the Gulf Monarchies

The Gulf monarchies have been generally perceived as status quo actors reliant on the USA for their security, but in response to regional events, particularly the Arab Spring of 2011, they are pursuing more activist foreign policies, which has allowed other international powers to play a larger role in regional affairs.

This book analyses the changing dynamic in this region, with expert contributors providing original empirical case studies that examine the relations between the Gulf monarchies and extra-regional powers, including the USA, Russia, China, India, Brazil, Turkey, Japan, South Korea, France, and the United Kingdom. At the theoretical level, these case studies explore the extent to which different international relations and international political economy theories explain change in these relationships as the regional, political and security environment shifts. Focusing on how and why external powers approach their relationships with the Gulf monarchies, contributors ask what motivates external powers to pursue deeper involvement in an unstable region that has seen three major conflicts in the past 40 years.

Addressing an under-analysed, yet important topic, the volume will appeal to scholars in the fields of international relations and international political economy as well as area specialists on the Gulf and those working on the foreign policy issues of the extra-regional powers studied.

"In this excellent collection the editors managed to assemble a star lineup to reflect on what is a crucial nexus in international politics. This is policy relevant research at its best, combining important policy hindsights with solid scholarship that will withstand the test of time. Recommended reading for both scholars and policy makers" - Matteo Legrenzi, Ca’ Foscari University of Venice.

"Amid much that has been said and written on the topic, this volume presents fresh perspectives and insights into the critical and multi-dimensional relations of the states of the Persian Gulf with the rest of the world, ranging from the United States and Russia to India and Korea. This is an extremely timely and important volume, and I highly recommend it for anyone wishing to better understand a region that is once again at the epicenter of international competition and tensions." -Mehran Kamrava, Director, Center for International and Regional Studies and Professor, Georgetown University-Qatar.

"Jonathan Fulton, Li-Chen Sim and their colleagues have made an important contribution to the study of the international relations of the Arab Gulf monarchies. Their book will serve as a useful reference for policy makers, scholars, students and other concerned with this subject." - Mark N. Katz, professor, Schar School of Policy and Government, George Mason University

David B. Roberts and Cinzia Bianco

Jonathan Fulton is Assistant Professor of Political Science in the College of Humanities and Social Sciences at Zayed University, in Abu Dhabi, United Arab Emirates.

Li-Chen Sim is Assistant Professor and Chair of the Department of Social Sciences at Zayed University, in Abu Dhabi, United Arab Emirates.