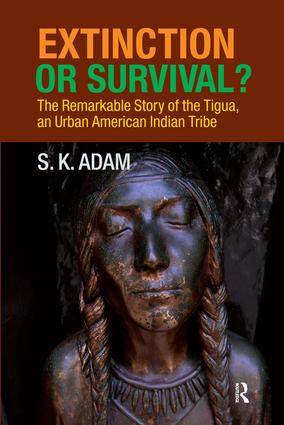 The Remarkable Story of the Tigua, an Urban American Urban Tribe, 1st Edition

How could an urban American Indian tribe, having survived relentless earlier governmental attempts to declare its culture extinct, be once again on the verge of extinction? The Tigua of Ysleta del Sur Pueblo dwell in the outskirts of El Paso, Texas, where the infamous Jack Abramoff was in the news for helping to close their highly successful casino. This casino had created jobs and funded health care for the tribe, and now the Tigua are once more taking action to preserve their economy, membership, and culture. This highly publicised casino story is set against the remarkably rich history of the Tigua, including earlier attempts by national and state governments to steal the tribe's land and destroy its legal status. Anthropologist S. K. Adam explores how questions of identity can be linked to cultural survival: Had the Tigua somehow survived 300 years of persecution and urban encroachment, or, as alleged by the government, were they really just Mexicanised Indians acting fraudulently? Adam examines how terms such as indigeneity, identity, authenticity, culture change, and perseverance are understood and defined by the US government. He analyses how issues of power, law, discourse, genocide, and self-determination affect the relationship between the United States and its indigenous populations, past and present.

“… a nice complement to growing literature on urban American Indians, and this reviewer is especially pleased with Adam’s methodology and his tackling of identity politics and Native persistence. Highly recommended.”

“Culturally the people of Ysleta Del Sur Pueblo are far different from their ancestors who arrived with the Spanish refugees fleeing the Pueblo Revolt of 1680. However, in spite of racism, land, culture and language loss, intermarriage with non-Indians, hostility from the state of Texas, and involuntary absorption into the urban area of El Paso, they have retained a strong community cohesiveness and identity as Indian. What make this study important is that the people of Ysleta Del Sur are not unique, there are many Indian communities, recognized and unrecognized, scattered throughout the United States that have managed to survive what would appear to have been overwhelming challenges to their continued existence. In this study, Adam presents important incites in to the survival of such communities and what it means to be Indian in the twenty-first century.”

“Significantly, the United States was one of just four nations that in 2007 voted against The UN Declaration on the Rights of Indigenous Peoples which recognized the rights of indigenous peoples to exist as distinct, self-governing and economically self-sufficient communities. 144 nations voted in favor of the Declaration. This book is an excellent background for understanding why this Declaration is so important, and why it is so relevant for Indian peoples in the United States. Adam gives us a well-nuanced case-study of the remarkably resilient Ysleta del Sur Pueblo (also known as the Tigua), a Native American tribal nation located in El Paso, Texas. The Tigua have resisted 300 years of domination by Spanish, Texans, and American governments, and are now actively engaged in their nation-building process. The Tigua experience illustrates the complexities of the contemporary struggle of indigenous peoples to maintain cultural autonomy and socio-economic survival as distinct communities. Adam shows that successful ethnic identity involves individual identity, community identity (us), and outsider (them) recognition. The dilemma for indigenous peoples is that if they adopt a rigid list of “essential” cultural traits to meet outsider expectations of Indian “authenticity,” they risk loss of official recognition by governments and external institutions when they are forced by circumstances to make changes in order to adapt and survive.”

“The book successfully balances attention to the ethnographically particular with a more general engagement of some of the salient anthropological questions of the last couple of decades concerning indigeneity.”

“Adam offers an impressive analysis of the struggle of the Tigua people to maintain their identity through a history in which they have repeatedly had to adapt their way of life to changes driven by powerful regional, national and international forces. In doing so he offers a strong scholarly and political challenge to those who dismiss the claims of groups such as the Tigua to enjoy the benefits, such as they are, of official recognition as American Indians. This is anthropological advocacy at its best, both intellectually and ethically.”