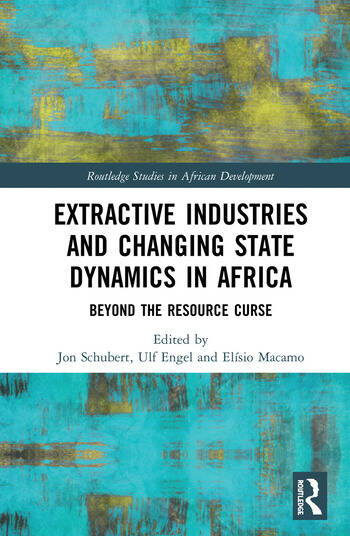 Extractive Industries and Changing State Dynamics in Africa: Beyond the Resource Curse

This book uses extractive industry projects in Africa to explore how political authority and the nation-state are reconfigured at the intersection of national political contestations and global, transnational capital. Instead of focusing on technological zones and the new social assemblages at the actual sites of construction or mineral extraction, the authors use extractive industry projects as a topical lens to investigate contemporary processes of state-making at the state–corporation nexus.

Throughout the book, the authors seek to understand how public political actors and private actors of liberal capitalism negotiate and redefine notions and practices of sovereignty by setting legal, regulatory and fiscal standards. Rather than looking at resource governance from a normative perspective, the authors look at how these negotiations are shaped by and reshape the self-conception of various national and transnational actors, and how these jointly redefine the role of the state in managing these processes for the ‘greater good’. Extractive Industries and Changing State Dynamics in Africa will be useful for researchers, upper-level students and policy-makers who are interested in new articulations of state-making and politics in Africa.

Jon Schubert is a Leverhulme Early Career Fellow at the Anthropology Department at Brunel University London, UK, and the author of Working the System: A Political Ethnography of the New Angola

is Professor of Politics in Africa at Leipzig University, Germany, Professor Extraordinary in the Department of Political Science at Stellenbosch University, South Africa, and a visiting professor at the Institute for Peace and Security Studies at Addis Ababa University, Ethiopia

is Professor of African Studies, Director of the Centre for African Studies and Head of the Social Sciences Department at the University of Basel, Switzerland

"By focussing on the processual rather than the categorical Extractive Industries and Changing State Dynamics in Africa destabilises the narratives that have dominated thinking in policy and academic circles on the nature of Africa’s extractive industry and its interactions and role with the state. It makes an important and compelling case for looking to the negotiated, contested and contingent nature of the state, and the extractive sector." — Patience Mususa, The Nordic Africa Institute, Sweden

"Africa’s historic dependency on primary commodities is once again in focus as prices have tailed off. While the days of "Africa rising" may be over, African states continue to renegotiate their position and seek to deal with the problems and potential of natural resource endowments. The very notion of what the state is and what it should do is continually discussed and reformed, ever more so under current conditions. Under pressure from both domestic and external constituencies, the evolving functions, competences and power of the state continues to evolve – processes that are ably captured in this important volume." — Ian Taylor, Professor in International Relations and African Political Economy at the University of St Andrews, UK, and Chair Professor in the School of International Studies, Renmin University of China

"In recent years there has been a burgeoning literature on the role of extractive industries in African economies. But there are few critical analyses that probe how these industries affect state formation, particularly the relations between elites and masses. Going beyond the popular conceptions of the state in Africa, this book provides an elegant examination of the intersection among multiple actors in the extractive industries and various African states. In addition to excellent conceptual chapters, comparative perspectives from Cameroon, Ghana, Mozambique, and South Africa illuminate an area of growing academic and policy significance." — Gilbert M. Khadiagala, Jan Smuts Professor of International Relations, University of the Witwatersrand, South Africa

and Elísio Macamo, uses various extractive industry projects from across Africa as heuristic

the juncture of national political competition and globalised transnational capital. The

connection. They thus attempt to comprehend how African political agents bargain with

private capitalist actors, and hence redefine perceptions and the performance of sovereignty.

This is primarily done through the establishment of legal, regulatory and fiscal standards.