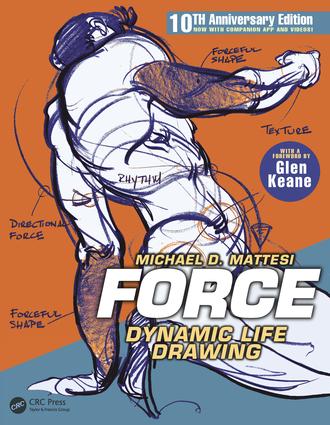 Bring your artwork to life with the power of the FORCE! Watch, listen, and follow along as Mike Mattesi demonstrates the fundamental FORCE line and explains dynamic figure drawing techniques through 30 videos that are launched through the book's companion App. Packed with superb, powerfully drawn examples, the updated third edition of FORCE features an all-new section on the "FORCE blob," and dozens of fresh illustrations. Mike Mattesi’s 10th anniversary edition of FORCE will teach readers how to put thought and imagination to paper. Whether you are an illustrator, animator, comic book artist, or student, you'll learn to use rhythm, shape, and line to bring out the life in any subject.

The 10th Anniversary Edition contains numerous improvements. Around 30 videos are embedded within the book and accessible through the FORCE Drawing App. In the App, click on the image of the camera, point your mobile device’s camera at the page with the symbol, and then finally tap the video card image floating above the drawing to launch the video. Then sit back and watch the video that shows me creating that drawing and discussing my process. Many new drawings can be found within this edition and the addition of color now further clarifies the theory of FORCE.

Michael Mattesi has authored four FORCE books, published in numerous languages, utilized around the world to inspire and educate artists on the concept of FORCE. He has instructed FORCE Drawing for over twenty years and inspired thousands of artists.

Michael lives in northern California with his wife and two daughters. Visit him at:

or email him directly: