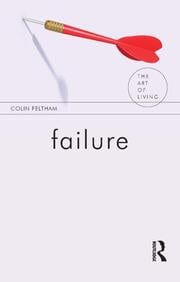 Failure, success's ugly sister, is inevitable - cognitively, biologically and morally. We all make mistakes, we all die, and we all get it wrong. A chain of flaws can be traced through all phenomena, natural and human. We see impending and actual failures in individual lives, in marriages, careers, in religion, education, psychotherapy, business, nations, and in entire civilizations. And there are chronic and imperceptible failures in everyday domains that most of the time we barely notice, often until it is too late. Colin Feltham expores what constitutes failure across a number of domains. He takes guidance from the work of such diverse philosophers and thinkers as Diogenes, Epictetus, Augustine, Schopenhauer, Kierkegaard, Heidegger, Sartre, Camus, Cioran and Ricoeur, while also drawing on the insights of artists and writers such as van Gogh, Arthur Miller, Philip Larkin, Samuel Beckett, Charles Bukowski and Philip Roth. Precursors and partial synonyms for failure can be seen in the concepts of hamartia, sin, fallenness, non-being, false consciousness and anthropathology. Philosophy can help us but is itself, in its reliance on language and logic, subject to inherent flaws and failures. It is the very pervasiveness yet common denial of failure which makes it a compelling topic that cries out for honest analysis. We live in a time when the cliche of failed Marxism may be segueing frighteningly (for some) into the failure of 'selfish capitalism', in a time of geopolitical uncertainty and failure to address the dire need for agreement and action on climate change. But many of us are also painfully aware of our own shortcomings, our own weakness of will and lack of authenticity. Trying to identify where the lines may be drawn between individual responsibility, social policy, and historical and biological dark forces is a key challenge in this fascinating book.

Introduction 1. Origins, meanings and nuances of failure 2. Failure across the lifespan 3. Collective human folly, sin and error 4. The tragic arts 5. Being a failure 6. Learning from failure Further reading References