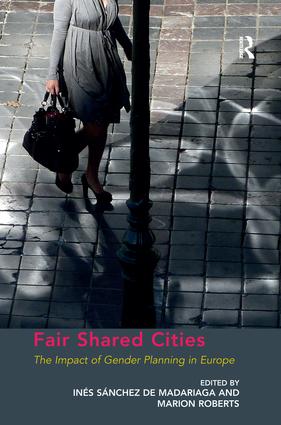 The Impact of Gender Planning in Europe, 1st Edition

Bringing together a diverse team of leading scholars and professionals, this book offers a variety of insights into ongoing gender mainstreaming policies in Europe with a focus on urban/spatial planning. Gender mainstreaming was first legislated for in the European Union with the Treaty of Amsterdam in 1999 and, although many interesting developments have occurred throughout the decade that followed, there is still much to do in terms of policy, knowledge production, dissemination and education. This work contributes to all three objectives, by advancing the state of knowledge, as well as providing educational and professional tools in the field of gender sensitive planning in Europe. The volume begins by explaining the concept of gender mainstreaming in relation to its origins in the 'second wave' of the women's movement and critiques of planning, architecture, transport planning and other built environment disciplines. It then provides a brief history of how gender mainstreaming was incorporated into European law, before focussing on the theoretical issues and questions that surround the concept of gender mainstreaming as they relate to urban space and the planning of cities and regions, including a discussion of the persistence of inequalities between the sexes in their access to urban space and services. In particular, the division between waged and unwaged work and its impact on the social construction of gender and of the physical built environment is considered. The differences between definitions of feminism and their implications for action in planning and design are also explored, paying regard to the tensions between a feminist vision of a transformation of gender relations and the requirements of gender mainstreaming to accommodate the different needs of women and men in their everyday lives in urban space. Throughout the book, key issues recur, such as the importance of time and space in the experience of urbanism, resistances to change on the part of institutions and social structures, and the importance of networks. Education and training also appear as common themes, as do citizen participation and the structures of governance. The chapters are organised into four sections: concepts, structures, empowerment and spatial quality. Contributors demonstrate a variety of approaches to the intersections of gender, women, cities, and planning, dealing with substantive and procedural issues in planning, at both local and regional scales. They stress the links between environmental sustainability and gender-sensitive urban development. The book concludes by putting forward an outlook for future action.

’When seeking to raise the lack of interest in still-to-be-met women and planning� issues, so often planners tell me, Oh we’ve done women, you should be concerned with the environment�. Thus it is to be welcomed that another urban feminist book has come along, in these times in which environmental sustainability dominates the agenda and marginalises, indeed ignores, matters of gender and equality. Indeed it is very curious that the sustainability and diversity agendas seem to exist in separate worlds, as two of the most powerful forces in modern urban policy-making, especially since so many environmental policies have been developed without reference to gender issues and thus prove impractical and discriminatory for women.’ Clara Greed, Emerita Professor, University of the West of England, UK ’Cities should be liveable for everyone and the gender lens provides one of the key perspectives we need as planners. Too few practicing planners still grasp this. This important contribution to the literature helps us better understand where to go next.’ Dory Reeves, University of Auckland, New Zealand 'The chapters are concise and specific, and its structure allows the editors to bring together a wide variety of research on an array of gender planning issues… the text is incredibly thought provoking and its varied contributions would suit a variety of educational contexts, from undergraduate and graduate courses on urban planning, gender and European politics to practitioners and policymakers.' LSE Review of Books 'Fair Shared Cities is an original edited collection featuring state-of-the-art conceptual treatises and rich empirical case studies on gender planning in diverse European urban contexts.' Environment and Planning B