Families, Values, and the Transfer of Knowledge in Northern Societies, 1500–2000 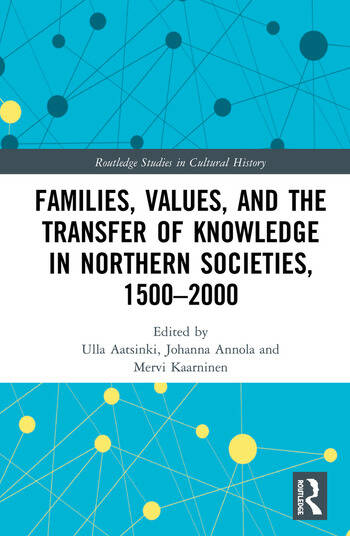 Families, Values, and the Transfer of Knowledge in Northern Societies, 1500–2000

This edited collection sheds light on Nordic families’ strategies and methods for transferring significant cultural heritage to the next generation over centuries. Contributors explore why certain values, attitudes, knowledge, and patterns were selected while others were left behind, and show how these decisions served and secured families’ well-being and values. Covering a time span ranging from the early modern era to the end of the twentieth century, the book combines the innovative "history from below" approach with a broad variety of families and new kinds of source material to open up new perspectives on the history of education and upbringing.

Introduction: Approaches to Changing Values of Upbringing and Education in the Nordic Societies  Part I: Raising a Family  1. How to Raise Good Children?: Disciplinary Correction in Early Modern Advice Books  2. When Parenting Fails: Religious Upbringing, Discipline, and Public Disapproval in Early Modern Finland  3. The Inheritance of a Good Life: How the Ideals of the Good Life Have Been Negotiated and Transmitted Between Generations in Finland and Canada  Part II: Transferring Livelihood Values  4. German Families and Their Family Strategies: Marriage and Education in Eighteenth- and Nineteenth-Century Provincial Towns in the Northern Baltic  5. Knowledge Transfer Within Artisan Families in Early Nineteenth-Century Rural Finland  6. Culture, Context, and Family Networks: Values and Knowledge Transfers Among Eastern European Jews in the Nordic Countries, 1880–1940  7. Parents Know Better?: The Influence of Parents on Young People’s Transitions From Compulsory Schooling To Work And Further Education in Early 1960s Helsinki  Part III: Focusing on Social Mobility  8. Rethinking Social Mobility: The Social Background and Career of Students from the "Vyborg Nation", 1833–1899  9. A Place in the Sun?: Education as a Middle-Class Family Value in Nineteenth-Century Finland  10. "Gifted Girls": The Values, Attitudes, and Experiences of the First Generation of Finnish Female Students in the Late Nineteenth and Early Twentieth Centuries  Part IV: Dealing with Tensions  11. Transferring Political Heritage: Finnish-American Communities and Civic Education  12. Sami Schoolchildren and the Transfer of Knowledge and Culture in the Twentieth Century  13. Schooling the Muslim Family: The Danish School System, Foreign Workers, and Their Children from the 1970s to the Early 1990s

Ulla Aatsinki is a researcher at the University of Tampere.

Johanna Annola is a research fellow at the Centre of Excellence in History of Experiences, University of Tampere.

Mervi Kaarninen is a senior lecturer in History at the University of Tampere.