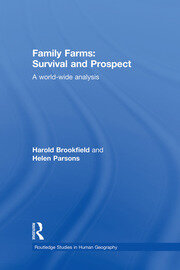 Marx, Lenin and Kautsky all regarded family farming as doomed to be split into capitalist farms and proletarian labour. Most modern economists regard family farming as an archaic form of production organization, destined to give way to agribusiness. Family Farms refutes these notions and analyses the manner in which family farmers have been able to operate with success in both developed and developing countries, using examples wherever these are illuminating.

This book begins by reviewing theoretical arguments about agricultural structures, and defines family farming. This is followed by five vignettes about farming in the first half of the twentieth century. The authors analyse the conditions of access to land and water, labour, livestock, tools and seed and review marketing arrangements and how they have changed since 1900. A three-chapter review of evolving policies in the North Atlantic countries, in the communist states, and in the developing countries, leads to a discussion of the impact of neo-liberalism. New issues of the farmer as steward of the environment are explored, as well as modern ideas about de-agrarianization and a discussion of land reform, tracing the experience of Mexico and Brazil. In two final chapters the more positive approach of pluriactivity is discussed and followed by a review of organic farming as a principal modern innovation. New political organizations representing family farming are described and their demands are discussed with empathy, but in a sceptical manner.

Family farming is an adaptable and resilient form of production organization, and these qualities have allowed it to survive. The future will be no easier than the past, yet family farming continues to flourish in most contexts. This book will be useful for researchers, students and lecturers interested in Development Studies, Rural Studies and Geography and Anthropology, as well as general readers who have an interest in farming.

1. Asking Agrarian Questions: Defining the Family Farm  2. Farming as it Was  3. Setting Up the Farm: Accessing Land and Water  4. Workforce, Livestock, Tools and Seeds  5. From the Farm to the Consumer  6. Farmers and the State: The Leading Role of the North Atlantic Countries  7. Farms Collectivized and De-Collectivized: Russia and China  8. The Periphery: From Structuralism to Neo-Liberalism  9. Farmers as Landscape Custodians: Environmentalism, Land Degradation and Pollution  10. Conservation and Growing Complexity since the 1980s  11. Collisions Over Land in Developing Countries: Mexico and Brazil  12. Contrasted De-Agrarianization: Africa and Asia  13. Two Paths into the New Century: Pluriactivity and Organics  14. Prospect