Far-Right Fantasy
A Sociology of American Religion and Politics 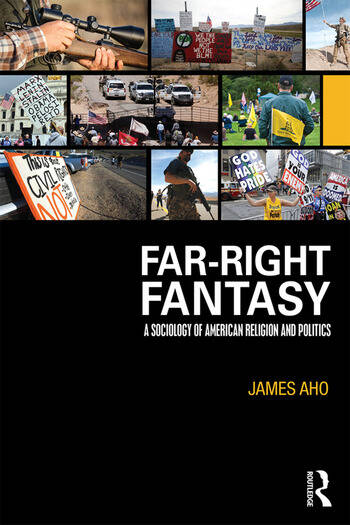 Far-Right Fantasy: A Sociology of American Religion and Politics

Far-Right Fantasy is a straight-forward, jargon-free study of contemporary American right-wing extremism. Accessible to both professional and lay audiences, it allows activists to speak for themselves in their own words. It takes the self-announced religious motivations of extremists seriously, and illustrates this by citing numerous cases of radical politics. The book addresses the strengths and weaknesses of the standard psycho-social-cultural explanations of far-right activism. It shows how extremists are similar educationally and psychologically to their more conventional neighbors; that they get into the movement in the same way that others become peace activists or radical environmentalists, namely, through their ties with fellow workers and church-goers, family members, and classmates; and that their views are given a patina of certainty by being repeatedly corroborated within closed, non-contaminated communication systems. The book avoids being preachy or judgmental, but it does try to challenge readers morally by submitting far-right fantasy to a formal ideology critique. It does this by showing how the reforms it recommends – a marketplace free of regulation, draconian immigration restrictions; an end to the federal reserve bank and the income tax; a balanced budget amendment to the Constitution; anti-union "right to work" laws and a return to debt slavery; the privatization of schools, the post office, and the commons, and so on – contradict its ostensible goal, which is to protect and enhance middle class interests. Far-Right Fantasy is suitable for adoption as a supplemental text in political psychology and sociology, sociologies of religion and knowledge, collective behavior, and American political history.

James Aho is Professor Emeritus at Idaho State University where he has taught for over forty years. Recognized as a Distinguished Researcher and Teacher, he is author of many books, including Body Matters: A Phenomenology of Sickness, Disease and Illness (co-written with his son, Kevin) and Sociological Trespasses: Interrogating Sin and Flesh. Aho is also author of two award-winning studies of religiously-motivated political violence, The Politics of Righteousness: Idaho Christian Patriotism and This Thing of Darkness: A Sociology of the Enemy.

"Aho (Idaho State Univ.) describes his perceptive, brief book as a 'straightforward, jargon-free study of contemporary right-wing extremism' in politics and religion—right on target in this unusual election year. He also points out that the views of these fantasy folk have entered mainstream conservatism. In a sense, vile words are the book's subject—the vile words of far-right fantasists. As used here, 'far-right fantasy refers to an intellectual style with a belligerent tone, an exotic history of the world, and a concrete program of social reform.' Aho's stated goal is to 'aid the blind to recover their sight' and to remind readers of the terrible harm that can come from what these fantasists consider good intentions. He correctly describes groups such as Christian Patriots and Christian Dominionists as ultra-dangerous to true democracy in the US. These deluded fantasists say such things as 'anyone who tells you that the government is not tyrannical is ... a tyrant' and speak of the "Satanification" of the US in a 'paranoid style of politics. Aho presents a conservative list of 355 US right-wing related fatalities from 1980 to 2015. Hopefully, in this election year, this book will be widely read by voters, candidates, and TV interviewers. Summing Up: Essential. All levels/libraries."

"Aho revisits the dark world of right-wing extremist 'Christian Patriots,' and readers benefit from his deep acquaintance with this movement, which he analyzes with penetrating sociological insights. Perhaps the most disturbing aspect of his account is the evidence he musters to indicate how the worldview of these 'far-right fantasists' has percolated into mainstream conservatism."

"Aho's study of the right-wing fantasies of Christain patriots and white supremicists is grounded in a lifetime's study of sociological methods, religious history, and first-hand encounters with extremists in his own home state of Idaho. As he dispels simple-minded explanations of these outliers on the American scene, he also offers us a deeper understanding of their ideologies and convictions.  A delightful read as well as a profoundly informative work of scholarship."

University of South Florida and author of On Being Authentic.

"Authoritatively written and masterfully analyzed, this penetrating study journeys into the dark world of America's Christian extremists and their dangerous political fantasies. It is as gripping as it is unsettling--a must read."

Mark Juergensmeyer, author of Terror in the Mind of God: The Global Rise of Religious Violence