Farming, Fascism and Ecology
A life of Jorian Jenks 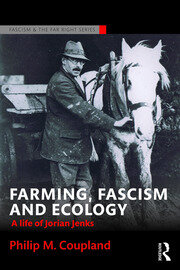 Farming, Fascism and Ecology: A life of Jorian Jenks

The life of Jorian Jenks (1899-1963) has great potential to upset settled assumptions. Why did a sensitive and intelligent man from a liberal family become a fascist? How did a Blackshirt go green?

The son of an eminent academic, from his childhood onwards Jenks instead longed to farm. Lacking the means to do so, he worked as a farm bailiff and then, in New Zealand, as a government agricultural instructor. Finally, a legacy permitted him to come home and become a tenant farmer. Struggling to survive in the economic depression of the 1930s, he became an author and activist for rural reconstruction. Then, having lost faith in the established parties, he joined the British Union of Fascists. Becoming one of the Blackshirts’ leading figures, he was imprisoned without trial during the war. On his release, Jenks returned to the struggle, this time in the cause of ecology, becoming a pioneer of today’s organic movement and a founder of the Soil Association.

This book draws on an extensive range of sources, a large proportion of which were previously unseen by historians. For the first time, it portrays the private and public life of this unusual man, revealing many hitherto un-glimpsed facets of Jenks’ life.

12. The Land and the People

24. Resurrection of the RRA

Philip M. Coupland is a researcher and author. He has published a book on the British churches and European integration, and has written widely on aspects of British interwar fascism.

"Philip Coupland's dedicated and impressive detective work illuminates the controversial life of Jorian Jenks, in that complex area of twentieth-century culture where politics merged with organic farming and economics with religion. This biography is a most valuable contribution to the history of environmentalism in Britain."

"Coupland’s book is both scholarly and fascinating. With a wealth of new archival material, we now at last have an in-depth study of a man central both to pre-war Fascist agricultural policies and to the post-war ecological movement."

, Emeritus Professor, King’s College London and author of Fellow Travellers of the Right and Patriotism Perverted.

"Philip Coupland has unearthed a vast amount of information and his engrossing biography is the first in-depth study of Jenks."

"His comprehensive and insightful work is far more important than a mere biography of a right-wing eccentric, particularly in shedding light on the problematic relationship between ecological and fascist movements."

"Green Fascism in the future. British Fascism in its present form may be dying
out, but the coming crises brought about by climate change, mass migration
and competition over resources will have great potential to disrupt existing
political and social structures. The re-emergence of Fascism will also depend on
whether the nation survives as a motivating force in an increasingly globalised
world."