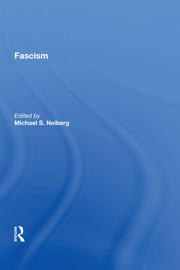 This volume presents the best writings on the origins, development, success and failure of fascism outside Germany. By treating the problem in a global context, these essays together add tremendous complexity to our understanding of one of history‘s most destructive political movements. The collection covers theories, origins and definitions of fascism, fascism in power, fascism in opposition, and fascism in a global and comparative setting.

Contents: Introduction. Part I Theories, Origins and Definitions: Modernism and fascism: the politics of culture in Italy, 1903-22, Walter L. Adamson; What fascism is not: thoughts on the deflation of a concept, Gilbert Allardyce; Fascism as political religion, Emilio Gentile; Five stages of fascism, Robert O. Paxton; Interpretations of the origins of fascism, Roberto Vivarelli; Democracy and fascism: class, civil society and rational choice in Italy, E. Spencer Wellhofer. Part II Fascism in Power: Dictatorship from below: local politics in the making of the Francoist state, 1937-48, Antonio Cazorla-Sanchez; Italian fascism: whatever happened to dictatorship?, Paul Corner; Women under Italian fascism, Alexander De Grand; The ambivalence of Italian antisemitism: fascism, nationalism, and racism in Trieste, Maura E. Hametz; Il grido della stirpe and Mussolini's 1938 racial legislation, Stefano Luconi; Fascism and right authoritarianism in the Iberian world - the last 20 years, Stanley G. Payne; Democracy's breakdown and the rise of fascism: the case of the Spanish 2nd Republic, 1931-6, Sara Schatz. Fascism in Opposition: Defining French fascism, finding fascists in France, John Bingham; Bernanos, Drumont and the rise of French fascism, John Hellman; Tell me chum, in case I got it wrong. What was it we were fighting during the war? The re-emergence of British fascism, 1945-58, Nicholas Hillman; Fascism in France and the strange case of the croix de feu, William D. Irvine; Was fascism an ideology? British fascism reconsidered, Dave Renton; Patterns of membership and support for the British Union of Fascists, G.C. Webber. Fascism in a Global and Comparative Setting: A 'dog in the night time' problem: American fascism in the 1930s, Peter Amann; Fascism and Italian-American identity. A case study: Utica, New York, Philip A. Bean; Fascism and politics in Peru during the Benavides regime, 1933-39: the Italian perspective, Orazio Ciccarelli; Comment: fascism and t