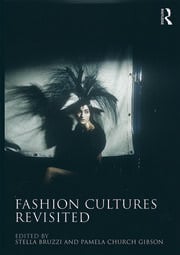 Following on from the ground-breaking collection Fashion Cultures, this second anthology, Fashion Cultures Revisited, contains 26 newly commissioned chapters exploring fashion culture from the start of the new millennium to the present day. The book is divided into six parts, each discussing different aspects of fashion culture:

explores every facet of contemporary fashion culture and the associated spheres of photography, magazines and television, and shopping .Consequently it is an ideal companion to those interested in fashion studies, cultural studies, art, film, fashion history, sociology and gender studies.

Fellow of the British Academy. Her publications include Undressing Cinema: Clothing

Daddy: Fatherhood and Masculinity in Post-war Hollywood (2005) and Men’s Cinema:

Masculinity and Mise-en-scene in Hollywood (2013). She is currently writing Approximation:

Documentary, History and the Staging of Reality, the culmination of a Leverhulme Major

Research Fellowship due to be published by Routledge in 2015.

is Reader in Cultural and Historical Studies at the London College

of Fashion, University of the Arts London. She is Principal Editor of the journal Film,

Fashion and Consumption and has published widely on film, fashion and gender. Her

found the European Popular Culture Association and was its first President. Her forthcoming

project will examine the history of the fashion documentary.

"Fashion Cultures Revisited constitutes an important contribution to the ever-growing body of fashion and dress literature by providing a conceptually underpinned bird’s-eye view of the subject. Hopefully the editors will pay another visit to the culture of fashion in a decade, as it will not only be fascinating to see what shapes it will take, but also who will analyse these, taking into account the rising number of fashion scholars coming out of an education dedicated to the subject, rather than the many different disciplinary heads that have made the theorization of fashion what it is today, refl ected so well in the present anthology." - Renate Strauss, Royal College of Art