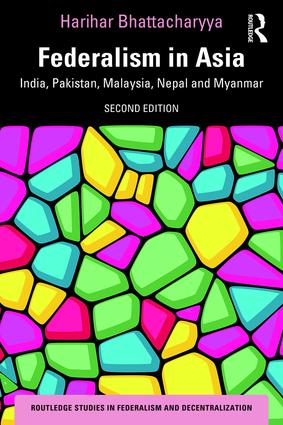 This comprehensive book analyzes the successes and failures of federalism in India, Pakistan, Malaysia, Nepal and Myanmar for the political accommodation of ethno-regional diversity, and assesses their comparative significance for other countries in Asia.

This revised new edition incorporates updated demographic, religious and linguistic data for the case study countries, and examines some of the major changes that have taken place in formally federal states since 2010, including: the 18th Amendment of the Constitution in Pakistan, in 2010, which gave a major turn to decentralization by empowering the provinces; the new federal democratic Constitution that was introduced in Nepal in 2015; and the abolition of the Planning Commission, the National Development Council, and the Special Category States status, in India. The author examines growing tensions between nation and state-building in ethnically plural societies; modes of federation-building in Asia; persistent ethnic tensions in federations, and the relationship between federalism and democracy; and federalism and decentralization.

The book will be of use to advanced undergraduate and postgraduate students of Asian politics, comparative federalism, and modern Asian political history and institutions, as well as policymakers on ethnic conflict regulation and peace studies, and stakeholders in ethnic power sharing and political order.

"Anyone interested in South & South East Asian federations should start with Professor Bhattacharyya’s survey; it addresses the established federations, the emergent Nepalese federation, and the more precarious case of Myanmar." — Brendan O’Leary, University of Pennsylvania, USA

"Federalism as a political institution holds diverse societies together through an adroit conflation of self rule and shared rule, generating governance, political order, and legitimacy. Bhattacharyya applies this core idea critically to five federations of Asia. A hugely enjoyable book that enriches the classic wisdom and takes it forward." — Subrata K Mitra, Heidelberg University, Germany

1. Concept of federalism and its relevance

3. Origin and development of federalism: colonialism, decolonization and revolution

7. Federalism and Forms of Decentralization

Conclusion: Beyond the Diversity problematic

Harihar Bhattacharyya is a Professor of Political Science at Burdwan University, West Bengal, India. He has taught previously at Hull University, UK; Heidelberg University, Germany; and Delhi University, India. Known globally as an expert in Indian federalism and comparative federalism, he has published extensively on the subject. His book publications include: Federalism in Asia (2010: Routledge); India as a Multicultural Federalism (In comparison with Swiss Federalism) (2001); Radical Politics and Governance in India’s North East: The Case of Tripura (2018: Routledge); co-authored) Politics and Governance in Indian States: Bihar, West Bengal and Tripura (2018). His journal articles include: ‘Indian Federalism and Democracy: The Growing Salience of Diversity-claims over Equality-claims in Comparative and Indian Perspective’ (Regional and Federal Studies 2015) and ‘Pitfalls of India’s Ethno-federal Model of Ethnic Conflict Management: Tension Between Tribal Ethnicity and Territory in India's North East’. (Ethnopolitics 2019).

Routledge Studies in Federalism and Decentralization

The series publishes outstanding scholarship on federalism and decentralization, defined broadly, and is open to theoretical, empirical, philosophical, and historical works. The series includes two types of work: firstly, it features research monographs that are substantially based on primary research and make a significant original contribution to their field. Secondly, it contains works that address key issues of policy-relevant interest or summarise the research literature and provide a broad comparative coverage.