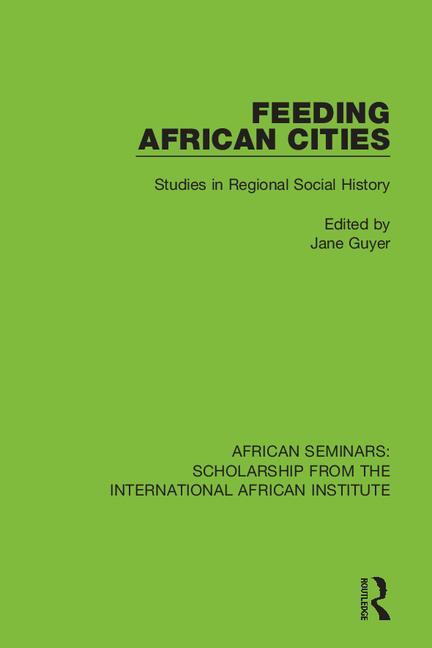 Originally published in 1987, this book traces the broad outlines of urban food policy, drawing attention to the limited knowledge of regional social history. Urban food supply systems in Africa have developed very fast, in the midst of societies in which food production was not in general oriented to feeding distant populations of 'specialist consumers'. Institutional and political links had to be forged between town and country if food supply was to be cheap and predictable. This volume explores the political and material dynamics of urban food supply through 4 case studies: Kano, Yaoundé, Dar es Salaam and Harare.

Jane I. Guyer (born 31 December 1943) is the George Armstrong Kelly Professor in the Department of Anthropology at The Johns Hopkins University. Before coming to Hopkins, Guyer taught at Northwestern University, Harvard University, and Boston University. She has published extensively on economic development in West Africa, on the productive economy, the division of labor, and the management of money. She was elected to the National Academy of Sciences in 2008 and serves on several international and national committees, including the International Advisory Group to the World Bank and the governments of Chad and Cameroon on the Chad–Cameroon Petroleum Development and Pipeline Project, the Lost Crops of Africa panel published by the National Academy, and the Board and Executive Committee of the African Studies Association. Her research has been celebrated for her contributions not just to empirical research but theoretical discourse on several topics.

Originally published between 1986 and 1989 the 8 volumes in this set reflect the research and debate surrounding many issues for the African economy, society and culture and as such make a vital contribution to effective development, both rural and urban. They re-issue key titles from the International African Library and the International African Seminars and address themes of direct relevance to contemporary Africa on topics as diverse as medicine, migration, housing, pastorialism and marriage.