#FeesMustFall and Youth Mobilisation in South Africa
Reform or Revolution? 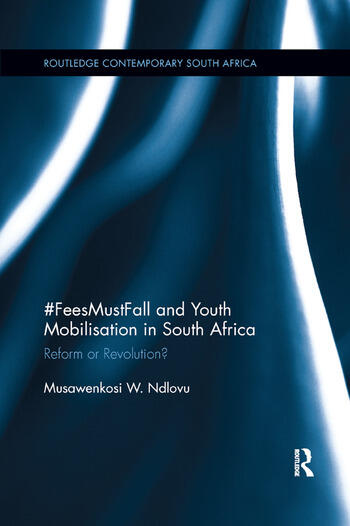 #FeesMustFall and Youth Mobilisation in South Africa: Reform or Revolution?

This book examines the historical FeesMustFall (FMF) university student protests that took place in South Africa and shows how the enduring historical construction, representation and conceptualisation of South African youth (as typically radical and political) contributed to the (mis)interpretation of FMF protests, and led to a discourse on an African National Congress-toppling revolution.

Arguing that the student protests were not the revolutionary movement they have been represented as, Ndlovu demonstrates that ideological divisions amongst the protestors, the declining economy, and reduced youth participation in the political public sphere cannot lead to a new revolution in South African politics.

This book will be of interest to students and scholars interested in South African politics, higher education, democracy and protest movements.

2. Were the 2015 student protests a revolution?

3. What the 2015 protests actually were and how they were possible?

4. Ikhohlisan’ihlomile:# FMF students’ engagement with power and their ideological differences

9. Conclusion: #FMF protests will not lead to a revolution per se (at least yet), but to wide ranging reforms