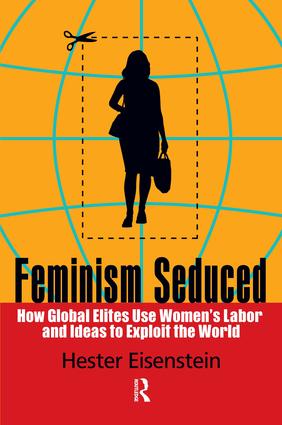 How Global Elites Use Women's Labor and Ideas to Exploit the World, 1st Edition

In a pioneering reinterpretation of the role of mainstream feminism, Eisenstein shows how the ruling elites of developed countries utilize women's labor and the ideas of women's liberation and empowerment to maintain their economic and political power, both at home and abroad. Her explorations range from the abolition of "welfare as we know it" and the ending of the family wage in the United States to the creation of export-processing zones in the global South that depend on women's "nimble fingers"; and from the championing of microcredit as a path to women's empowerment in the global South to the claim of women's presumed liberation in the West as an ideological weapon in the war on terrorism. Eisenstein challenges activists and intellectuals to recognize that international feminism is at a fateful crossroads, and argues that it is crucial for feminists to throw in their lot with the progressive forces that are seeking alternatives to globalized corporate capitalism.

"Feminism Seduced, written for a general audience, presents a powerful, historically grounded critique of liberal feminism. Drawing on three decades of writing by socialist/Marxist feminists and women-of-color feminists, Eisenstein weaves a compelling account of how the central ideas of “hegemonic feminism” have legitimized the corporate capitalist assault on the working class in the United States and on small farmers and workers, both urban and rural, in the global South. . . . The book’s synthetic scope, its clear and accessible style, and its concise summary of shifts in capitalist political economy from the mid-twentieth century to the present, make the book an ideal text for movement study groups as well as college classrooms."

“With her trademark clarity and wit, one of the leading intellectuals of contemporary feminism builds a troubling analysis of where mainstream American feminism has gone—celebrating gains for middle-class women, but also converging with ruthless corporate interests that exploit or marginalize most of the world's women. Hester Eisenstein's diagnosis, and her remedy, need to be heard by everyone concerned with women's interests and with social justice.”

“In this impressive book, Hester Eisenstein provides a provocative update of the classic argument of the relationship between Marxism and feminism. Through a historical analysis of the political economy of, what she calls, hegemonic or mainstream feminism, Eisenstein charts the transformation of labor feminism into mainstream feminism in the US, which entailed a shift from protection to equality, and which resulted in feminism unwittingly serving the needs of global capitalism rather than that of women. While some of the terrain—particularly of feminism in the service of empire, the disciplining of women's labor under neoliberalism, and the war on terrorism—has been covered by others, what sets her analysis apart is her unflinching critique of hegemonic feminism's complicity in abandoning issues of class and race even as it pays lip service to them. Finally, Eisenstein provides an outline for action which is much needed if we are to remain relevant to the lives of men and women facing the ravages of the current crises of global capitalism.”

“Feminism Seduced offers a compelling—and deeply unsettling—historically grounded account of the unintended consequences of late twentieth-century feminism. Eisenstein provocatively argues that ideas derived from the mainstream women's movement were appropriated by global corporations and the political forces that sustain them, and effectively used to legitimate the surging social inequalities that have emerged both in the United States and worldwide since the 1970s. This cautionary tale makes for timely reading, as the global economic crisis opens up new opportunities for feminists and other progressives.”

“This thoughtful and provocative book by a feminist academic argues that global corporations and their political allies have co-opted ‘mainstream feminism,' which Eisenstein says has not adequately analyzed and confronted issues of race, class, and economic globalization. The final chapter explores what the author calls ‘Islamophobia’ and the use of professed concern for women in Afghanistan and Iraq to justify wars waged by the U.S. for other motives.”

Feminism Seduced author Hester Eisenstein quoted in the London Review of Books, December 15, 2011: As Many Pairs of Shoes as She Likes

Preface and Acknowledgments Introduction: How I Came to Write This Book Chapter 1 Globalization and Women's Labor Chapter 2 Women, Work, and the Mainstreaming of Feminism Chapter 3 Fault Lines of Race and Class Chapter 4 In the United States: A Political and Economic Sea-Change Chapter 5 In the Global South: "Women" Replace Development Chapter 6 Islamophobia and the Global War on Terror Conclusion References About the Author