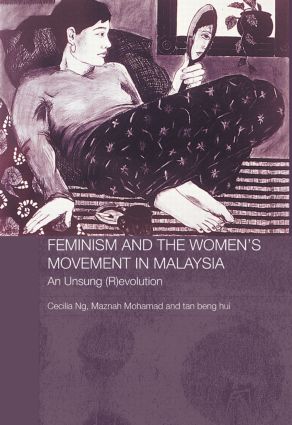 Feminism and the Women's Movement in Malaysia

Combining both personal and academic insights into the Malaysian women’s movement, this study provides an in-depth account of the multiple struggles of the Malaysian women’s movement, from securing gender equality in a patriarchal society to achieving unity among members of a multi-ethnic society that are further divided along class and religious lines.

Most historical versions of national struggles have created icons out of male figures. The authors of this book have provided a corrective to this. They detail the importance of the role of the women’s movement, led by numerous unsung personalities in promoting social change in Malaysia. The book centres on a crucial argument: that in the context of an ethnically fragmented post-colonial, authoritarian society, an autonomous woman movement, which began in the early eighties had actually achieved significant political success. However the study observes that by the late 1990s, feminist issues were also readily appropriated by the state and the market, and also suggests that the emergence of ‘market feminism’ poses specific challenges for the future of the Malaysian women’s movement. This thorough and engaging account of feminism and the women’s movement in Malaysia will capture the interest of scholars, policy makers and activists.

1. Introduction 2. Accommodating Feminisms: The Women’s Movement in Contemporary Malaysia 3. The Violence Against Women Campaign: A Never-ending Story? 4. An Unholy Alliance: Women Engaging with the State 5. Negotiating Political Islam: Women in Malay-Muslim Organizations 6. Muted Struggles: Challenges of Women Workers 7. Querying the Forbidden Discourse: Sexuality, Power and Dominance in Malaysia 8. Conclusion Appendix A: Key Members of the Joint Action Group against Violence against Women (JAG-VAW) Appendix B: The Women’s Agenda for Change Appendix C: As Malaysians and as Women – Questions for our Politicians and a Manifesto For The ‘90s

Cecilia Ng is an independent researcher and women's rights advocate. She has taught at Universiti Putra Malaysia , the Asian Institute of Technology, Thailand, where she served as editor of the AIT-based Journal of Gender, Technology and Development, as well as at the Science University of Malaysia. Cecilia has conducted research and published widely on gender, development and work and is active in women’s groups in Malaysia where she is involved in research, training and advocacy on advancing the women’s movement in Malaysia.

Maznah Mohamad is currently a Visiting Senior Research Fellow at the Asia Research Institute of the National University of Singapore. She is also author of the book The Malay Handloom Weavers: A Study of the Rise and Decline of Traditional Manufacture (1996) and co-editor of Feminism: Malaysian Critique and Experience (1994).

tan beng hui is trained in political economy and economic history. She has been involved in the Malaysian women's movement since 1990, during which time she has tried to put sexuality rights on the agenda of local women's groups. She worked for an international women's human rights NGO based in Kuala Lumpur for four years before returning to local activism. Currently, she is involved in organising Fiesta Feminista, an initiative to popularise feminism in Malaysia.

The Routledge Malaysian Studies Series publishes high quality scholarship that provides important new contributions to knowledge on Malaysia. It also signals research that spans comparative studies, involving the Malaysian experience with that of other nations.

This series, initiated by the Malaysian Social Science Association (MSSA) to promote study of contemporary and historical issues in Malaysia, and designed to respond to the growing need to publish important research, also serves as a forum for debate on key issues in Malaysian society. As an academic series, it will be used to generate new theoretical debates in the social sciences and on processes of change in this society.