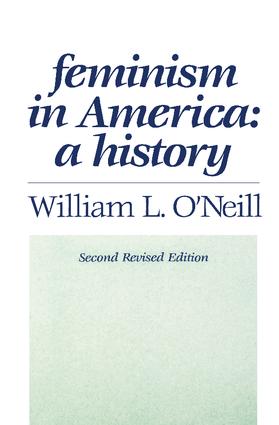 William L. O'Neill's lively history of American women's struggle for equality is written with style and a keen sense for the variety of possible interpretations of 150 years of the feminist movement, from its earliest stirring in the 1830's to the latest developments in the 1980s.

O'Neill's most controversial thesis is that the feminist movements of the past have largely failed, and for reasons that remains of deep concern; the movements have never come to grips with the fact that marriage and the family are the chief obstacles to women's emancipation. O'Neill also holds that the sexual revolution of the 1920s, far from liberating women, actually undermined their role in American life.

O'Neill treats seriously the ideas of the great feminist leaders and their organizations. His was the first book to deal directly with the failure of feminism as a social force in American society; to tie together the scattered people and events in the history of American women; and to examine seriously feminist experience in the twentieth century. Since the women's agenda is hardly complete, the women's movement remains active, often militantly so. In this new revised edition, O'Neill interprets and illumines not only the history of feminism, but aspects of feminism that still trouble us today.

O'Neill's book was widely heralded upon its initial publication. Elizabeth Janeway, writing for Saturday Review, calls it "a truly intelligent discussion…an extraordinary perceptive analysis." Carl Degler, in the Magazine of History calls A History of American Feminism "the most challenging and exciting book on the subject of women to appear in years." And Lionel Tiger, writing for the NewRepublic, says that "O'Neill has turned his mastery of a wide range of historical sources into a lively, engaging, and almost faultlessly sensible book."