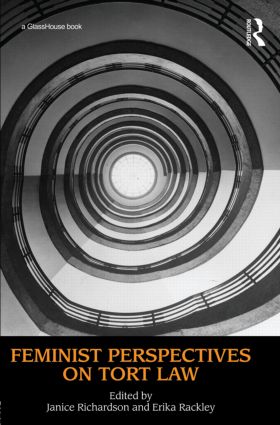 Feminist Perspectives on Tort Law offers a distinctly feminist approach to key topics in tort law. Ten original essays written by feminist legal scholars from the UK, US, Canada and Australia encompass a range of ways of thinking about women, tort law and feminism. The collection provides a fresh and original analysis of issues of long-standing concern to feminists as well as nascent areas of concern. These include conceptions of harm, constructions of reasonableness, the duty of care, the public/private divide, sexual wrongdoing, privacy and environmental law.

Written with both scholars and students in mind, Feminist Perspectives on Tort Law is an important and timely addition to key debates in tort law..

Janice Richardson is a Senior Lecturer in the Faculty of Law, University of Monash. She is author of: Selves, Persons, Individuals: Philosophical Perspectives on Women and Legal Obligations (Aldershot: Ashgate: 2004) and The Classic Social Contractarians: Critical Perspectives from Contemporary Feminist Philosophy and Law (Aldershot: Ashgate: 2009) and is co-editor, with Ralph Sandland, of Feminist Perspectives on Law and Theory (London: Routledge-Cavendish, 2000).

Erika Rackley is a Senior Lecturer in the Law School, Durham University, UK. She is co-author of Tort Law (OUP, 2nd edn, 2011) and co-editor of Feminist Judgments: From Theory to Practice (Hart, 2010).