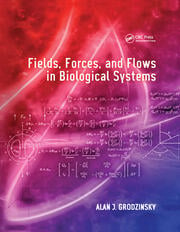 Fields, Forces, and Flows in Biological Systems describes the fundamental driving forces for mass transport, electric current, and fluid flow as they apply to the biology and biophysics of molecules, cells, tissues, and organs. Basic mathematical and engineering tools are presented in the context of biology and physiology.

The chapters are structured in a framework that moves across length scales from molecules to membranes to tissues. Examples throughout the text deal with applications involving specific biological tissues, cells, and macromolecules. In addition, a variety of applications focus on sensors, actuators, diagnostics, and microphysical measurement devices (e.g., bioMEMs/NEMs microfluidic devices) in which transport and electrokinetic interactions are critical.

This textbook is written for advanced undergraduate and graduate students in biological and biomedical engineering and will be a valuable resource for interdisciplinary researchers including biophysicists, physical chemists, materials scientists, and chemical, electrical, and mechanical engineers seeking a common language on the subject.

Dr. Alan Grodzinsky is Professor of Electrical, Mechanical, and Biological Engineering and Director of the Center for Biomedical Engineering at MIT. He graduated in electrical engineering from MIT in 1971, obtaining a doctorate three years later under the supervision of James Melcher, with a thesis on membrane electromechanics. Dr. Grodzinsky's research currently centers on the synthesis of electrical, mechanical, and chemical processes in tissue remodeling and repair. He is the President-Elect of the Orthopedic Research Society and has served as Chairman of the Gordon Research Conference on Bioengineering and Orthopaedic Science, President of the International Cartilage Repair Society, and Chairman of the Advisory Board for the Cleveland Clinic's Department of Biomedical Engineering. Dr. Grodzinsky has received the Goodwin Medal (MIT), an NIH Merit Award, the Kappa Delta Award from the American Academy or Orthopedic Surgeons, and was a Founding Fellow of the American Institute of Medical and Biological Engineering.