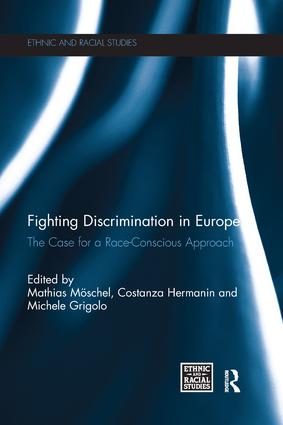 The Case for a Race-Conscious Approach, 1st Edition

The member states of the EU have only very recently begun to consider race and racism in the framework of equality legislation and policies. As opposed to an established Anglo-Saxon tradition of naming races and using racial categorisation to fight racism, most continental European countries resist this approach. This book investigates the problematic reception and elaboration of race as a socio-legal category in Europe.

Fighting Discrimination in Europe takes a fresh and interdisciplinary look at the normative, theoretical and concrete problems raised by the challenge of devising and enforcing policies to combat race discrimination in Europe. It engages with the juridical and political spheres, from the international level down to concrete cases of state and city policies. As the multifaceted relationship between race, discrimination and immigration is explored, new normative positions and practical approaches are developed, and new questions raised. This collection presents important new research for academics, researchers, and advanced students of Ethnic Studies, Migration Studies, Legal Studies, Sociology, Anthropology, and Policy Studies.

Michele Grigolo is FCT Postdoctoral Researcher in the Centre for Social Studies at the University of Coimbra, Portugal.

Race, ethnicity and nationalism are at the heart of many of the major social and political issues in the present global environment. New antagonisms have emerged which require a rethinking of traditional theoretical and empirical perspectives. The books in this series are based on special issues of Ethnic and Racial Studies, the leading journal for the analysis of these issues throughout the world. Expert authors and editors present interdisciplinary research and theoretical analysis, drawing on sociology, social policy, anthropology, political science, economics, geography, international relations, history, social psychology and cultural studies.