Film Criticism as a Cultural Institution 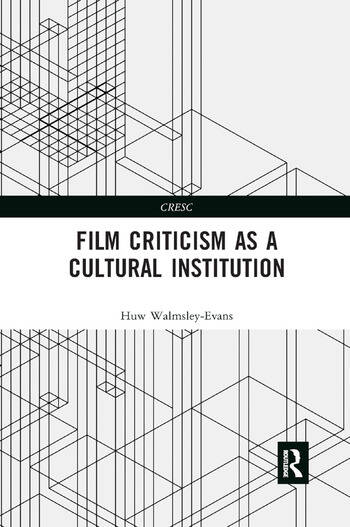 Film Criticism as a Cultural Institution

At the beginning of the 21st century film criticism was described as in crisis. The decline of print journalism, a series of lay-offs of prominent critics, and the rise of "amateur" reviewing online spurred a conversation about the decline, even death, of film criticism. This discourse flourished in part because film criticism has been little examined in scholarship to date. This book takes a deeper look at film criticism by focusing on its institutional contours. This is achieved through a combination of archival research and interviews with prominent film critics and stakeholders, including Adrian Martin (LOLA), Stephanie Zacharek (Time), Peter Bart (Variety), and Andrew Sarris (The Village Voice).

Film Criticism as a Cultural Institution first examines the contemporary crisis conversation surrounding film criticism, comparing this to historical precedents. It then provides what today’s crisis conversation does not: an account of film criticism’s institutional formations. Using primarily U.S. and Australian case studies based on interviews, observation and archival research—as well as accounts from other national schools—the book maps contemporary film criticism. Across various sites, such as publications or online spaces, and organisations, such as film critics circles, it elucidates film criticism’s institutional practices, tasks, comportments, and personae.