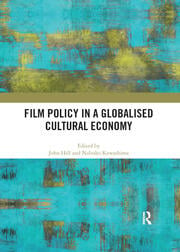 The past two decades have witnessed major changes in film industries worldwide in response to both economic globalisation and technological developments. The dominant position of Hollywood movies in the global film market has remained largely uncontested, but Hollywood itself has become increasingly international in its operations whilst ‘regional’ screen industries such as those in East Asia and in the Indian subcontinent have (re-)emerged and developed new forms of collaboration. The advent of digital technologies has also transformed the content of films and the ways in which they are made and consumed. Such changes, in turn, have posed new economic and cultural challenges for policy-makers around the world and led to a degree of rethinking of how film policy objectives are to be conceived, defined and implemented.

This collection brings together a range of international scholars from the USA, Europe and Asia to consider how film policy has responded to the various economic, technological and political shifts shaping the global film industry; and to identify the many tensions between global and local, economic and cultural, and public and private policy objectives that have been the result of these changes. This book was originally published as a special issue of the International Journal of Cultural Policy.

Introduction: film policy in a globalised cultural economy  1. Regulating the global infrastructure of film labor exploitation  2. Hollywood, the MPAA, and the formation of anti-piracy policy  3. Living with Hollywood: British film policy and the definition of ‘nationality’  4. German film policy’s new horizons  5. ‘Why not make films for New York?’: the interaction between cultural, political and commercial perspectives in Swedish film policy 1963–2013  6. Film policy under globalization: the case of Mexico  7. The Chinese–Korean co-production pact: collaborative encounters and the accelerating expansion of Chinese cinema  8. Film policy in Japan – an isolated species on the verge of extinction?

John Hill is Professor of Media at Royal Holloway, University of London, UK, and the author or editor of a range of books and journals including British Cinema in the 1980s (1999), Cinema and Northern Ireland (2006) and Ken Loach: The Politics of Film and Television (2011).

is Professor in the Faculty of Economics, Doshisha University, Kyoto, Japan, and Visiting Professor in the Policy Alternatives Research Institute, University of Tokyo, Japan. She is the author of two books on the creative industries (in Japanese 2009, 2013) and co-editor of Global Culture: Media, Arts, Policy, and Globalization (2002).