Finding the Family in Medieval and Early Modern Scotland 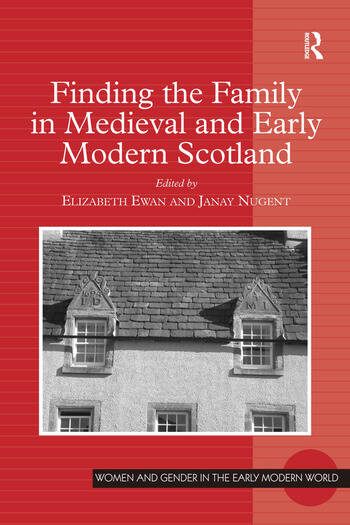 Finding the Family in Medieval and Early Modern Scotland

In this interdisciplinary collaboration, an international group of scholars have come together to suggest new directions for the study of the family in Scotland circa 1300-1750. Contributors apply tools from across a range of disciplines including art history, literature, music, gender studies, anthropology, history and religious studies to assess creatively the broad range of sources which inform our understanding of the pre-modern Scottish family. A central purpose of this volume is to encourage further studies in this area by highlighting the types of sources available, as well as actively engaging in broader historiographical debates to demonstrate how important and effective family studies are to advancing our understanding of the past. Articles in the first section demonstrate the richness and variety of sources that exist for studies of the Scottish family. These essays clearly highlight the uniqueness, feasibility and value of family studies for pre-industrial Scotland. The second and third sections expand upon the arguments made in part one to demonstrate the importance of family studies for engaging in broader historiographical issues. The focus of section two is internal to the family. These articles assess specific family roles and how they interact with broader social forces/issues. In the final section the authors explore issues of kinship ties (an issue particularly associated with popular images of Scotland) to examine how family networks are used as a vehicle for social organization.

Contents: Introduction: where is the family in medieval and early modern Scotland?, Elizabeth Ewan and Janay Nugent; Part I1Sources: Finding the family in the charters of medieval Scotland, 1150-1350, Cynthia Neville; 'And 4 years space, being man and wife, they loveingly agreed': balladry and early modern understandings of marriage, Katie Barclay; 'I now have a book of songs of her writing': Scottish families, orality, literacy, and the transmission of musical culture c.1500-c.1800, Dolly MacKinnon; The crucible: witchcraft and the experience of family in early modern Scotland, Scott Moir. Part 2 Family Roles: The name of the father: baptism and the social construction of fatherhood in early modern Edinburgh, Melissa Hollander; Parents and children in early modern Scotland, David G. Mullan; Crediting wives: married women and debt litigation in the 17th century, Gordon DesBrisay and Karen Sander Thomson; Lapidary inscriptions: rhetoric, reality and the Baillies of Mellerstain, Barbara C. Murison. Part 3 Family, Kin and Community: The spiritual ties of kinship in pre-Reformation Scotland, Mairi Cowan; 'Inressyng of kyndnes and renewing off thair blud': the family, kinship and clan policy in 16th-century Scottish Gaeldom, Alison Cathcart; A family affair: households, misbehaving anfd the community in 16th-century Aberdeen, J.R.D. Falconer; The famine of the 1690s and its aftermath: survival and recovery of the family, Karen Cullen; The disorder of Comrie, Perthshire after the '45: a leg in a cornfield, Deborah A. Symonds; Guide to further reading; Glossary; Index.

'The editors of this impressively wide-ranging collection of essays rightly point out that the search for the medieval and early-modern Scottish family has not gone far enough. Finding it has been immensely helped by both editors and contributors, whose work has done so much to move the subject on. A must for students of the family - and certainly not only within Scotland.' Jenny Wormald, University of Edinburgh, UK

’A pioneering and significant collection which takes the subject further.’ Northern History

’Although each piece is relatively brief, this volume packs a great amount of information and food for thought into a small package. ... I sincerely hope that their groundbreaking encourages others to dig deeper in the same earth, and I also hope that specialists in British family, women's, and social history put this volume on their "must read" list.’ The Medieval Review

’Finding the Family in Medieval and Early Modern Scotland is a treasure trove of information on a subject area that has long been overlooked by many conventional historians of Scotland before 1750. ...This is a beautifully produced volume, with rigorous scholarship throughout... every student of medieval and early modern Scottish history - and family history in general - should read this book and be encouraged to explore this topic further from the rich variety of sources available.’ Sixteenth Century Journal