Fine Cuts: Interviews on the Practice of European Film Editing 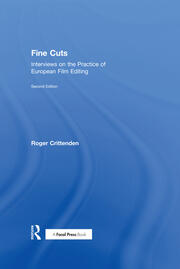 Fine Cuts: Interviews on the Practice of European Film Editing

In the expanded second edition of Fine Cuts, Roger Crittenden reveals the experiences of the greatest European film editors through his warm and perceptive interviews. This new edition builds on the foundations laid out in 2005, including interviews with the editors of films such as Day for Night, The Sacrifice, The Kid with a Bike, and Fanny and Alexander; new interviews with editors of such films as Tyrannosaur and The Other Side of Hope; and editors from a wider range of countries, including Austria, Belgium, Finland, Portugal, and Russia. The book now embraces all aspects of post-production, with insights into sound editing from Larry Sider, originator of the renowned School of Sound, and music composition from Oscar winner Dario Marianelli (Atonement).

Editors relate their experiences with directors including:

Foreword to 1st edition: Walter Murch – The Transformation of Chance into Destiny

After a distinguished career at the BBC, where he gained a special award for sustained excellence as a film editor, he was recruited to the new National Film and Television School as Head of Editing and later became Director of the MA programme. While with the NFTS, he taught in Moscow, Mexico City, Manila, Copenhagen, Singapore, Brisbane Australia, and in Cuba. In 2014 he was given the first ever CILECT International Teaching Award for his outstanding contribution to media pedagogy. More recently, he was appointed Adjunct Professor of Film at Griffith University in Brisbane, Australia. Roger is the author of two books on editing, as well as a book on Truffaut’s Day For Night for the British Film Institute's Film Classic Series.

As a result of the first edition of Fine Cuts, Roger was invited to curate symposia on film editing in Poland, Japan, Brazil, Cuba, Australia, and in his home institution (NFTS) in the UK, where he continues to act as a consultant and visiting tutor.

"What gives all of these interviews their complexity and warmth is not only the different nationalities, but even more so the richly diverse and ‘uncinematic’ family backgrounds of the editors collected here. Had they followed in their parents’ footsteps they would have instead become teachers, pilots, tailors, doctors, farmers, chemists, vegetable sellers, astronomers, bookkeepers, salesmen, road workers, dry cleaners, dentists or civil servants. Luckily for the readers of this marvelous book, and for world cinema, they took another route and – to use Godard’s evocative description of film editing – transformed chance into destiny, making the varied circumstances of their lives a reflection of montage at its most sublime, when accidental moments are propelled by structure into inevitability."

"The cutting room is where you learn how to make films, where you face up to your limitations and realise what you should have done. So, you'd better have a good relationship with your editor. The people talking here are amongst the best. Treat them well."
—Stephen Frears, BAFTA TV Award winner, Academy Award nominee; Director, Philomena (2013), The Queen (2006), Dirty Pretty Things (2002), Dangerous Liaisons (1988)

"Crittenden has juxtaposed individual interviews with essays and critical arguments by some of the directors who worked alongside these editors. For anyone who has enjoyed the French New Wave, Italian Neo-Realism, or the films of Andrei Tarkovsky or Ingmar Bergman, Crittenden's volume will be essential reading."
—Ray Zone, American Editors Guild Magazine

"An art that conceals as much as it enhances, editing is one of the most mysteriously alchemical of the practices fueling the seventh art, and its application can be radically different in, say, Soviet montage, commercial English-language cinema . . . or auteur-driven European films. The focus on the last, via interviews with more than two dozen practitioners, is what made Roger Crittenden’s Fine Cuts stand out on first publication in 2006, and it still stands out today.

Technology is frequently discussed, notably the seismic shift from analogue to digital editing . . . the differences between cutting 35mm and much fiddlier 16mm, and how the film’s final form can be dictated by specific shooting circumstances. An experienced editor himself, Crittenden is an alert and sensitive interviewer, happy to vary the form and content of each chapter in line with the interviewee’s own personality and preoccupations, just as they constantly have to do with their own projects."