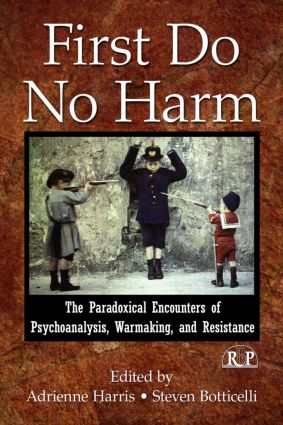 First Do No Harm

The Paradoxical Encounters of Psychoanalysis, Warmaking, and Resistance, 1st Edition

At the outset of World War I - the "Great War" - Freud supported the Austro-Hungarian Empire for which his sons fought. But the cruel truths of that bloody conflict, wrought on the psyches as much as the bodies of the soldiers returning from the battlefield, caused him to rethink his stance and subsequently affected his theory: Psychoanalysis, a healing science, could tell us much about both the drive for war and the ways to undo the trauma that war inherently breeds, but its principles could just as easily serve the enemy's desires to inculcate its own brand of "truth."

Even a century later, psychoanalysis can still be used as much for the justifications of warfare and propaganda as it is for the defiance of and resistance to those same things. But it is in the investigation of the motives and methods behind these uses that psychoanalysis proves its greatest strength. To wit, this edited collection presents published and unpublished material by analysts, writers, and activists who have worked at the front lines of psychic life and war from various stances. Set at a point of tension and contradiction, they illustrate the paradoxical relation of psychoanalysis as both a site of resistance and healing and a necessary aspect of warmaking, propaganda, and militarism. In doing so, we venture from the home front - from the trauma of returning veterans to the APA's own complicity in CIA "black sites" - across international borders - from the treatment of women in Latin American dictatorships to the resistance to occupation in Palestine, from mind control to an ethics of responsibility. Throughout, a psychoanalytic sensibility deconstructs the very opposition that it inhabits, and seeks to reestablish psychoanalysis as the healing discipline it was conceived to be.

"Psychologists wield tremendous power, from the sanctity of the therapist's couch to the cold, hard, dark reality of the CIA's secret prisons. Facing a professional leadership embedded with the Bush administration and the Pentagon, a small group of dedicated psychologists mounted a disciplined campaign to put an end to the torture that was being conducted with the support and participation of their peers. As this volume documents, the struggle to reform the American Psychological Association is a story of grassroots organizing against tremendous institutional power, to force their profession to abide by the ancient imperative to 'first do no harm.' The courageous efforts of these psychologists, described herein along with the overarching role of psychology in war and its aftereffects, bring to mind the lines of Mario Savio, launching the Free Speech Movement at UC-Berkeley in 1964: 'There's a time when the operation of the machine becomes so odious - makes you sick at heart - that you can't take part. You can't even passively take part. And you've got to put your bodies upon the gears and upon the wheels, upon the levers, upon all the apparatus, and you've got to make it stop. And you've got to indicate to the people who run it, to the people who own it that unless you're free, the machine will be prevented from working at all.'" - Amy Goodman, host and executive producer, Democracy Now!

"This collection holds its own among edited volumes that address the Bush White House decision to use torture. Because of its specificity to psychology, historical scope, and utilization of contemporary psychoanalysis, it warrants a wide readership. I recommend it to anyone who takes seriously trauma as a psychological condition and the place of ethics within psychology, as well as to those with interest in contemporary psychoanalysis." - Louis Rothschild, PhD., in PsycCRITIQUES

Botticelli, Harris, Introduction. Part I: Psychoanalysis and Antiwar Work: Healing. McGoldrick, Where is the "Post" in Posttraumatic Stress Disorder? First Impressions Working with Iraq and Afghanistan Soldiers. Gaudilliere, Men Learn from History that Men Learn Nothing from History. Boulanger, The Psychoanalytic Politics of Catastrophe. Thomas, Whose Truth? Inevitable Tensions in Testimony and the Search for Repair. Part II: The Paradox: Psychology's Militarism. Soldz, Psychologists Defy Torture: The Challenge and the Path Ahead. Reisner, From Resistance to Resistance: A Narrative of Psychoanalytic Activism. Altman, Torture and the American Psychological Association: A One-person Play. Summers, Violence and American Foreign Policy: A Psychoanalytic Approach. Part III: War and Militarism Deconstructed.Zaretsky, Psychoanalysis, Vulnerability, and War. Davoine, Casus Belli. Grand, Combat Speaks: Grief and Tragic Memory. Moss, War Stories. Stein, Notes on Mind Control: The Malevolent Use of Emotion as a Dark Mirror of the Therapeutic Process. Hollander, The Gendering of Human Rights: Women and the Latin American Terrorist State. Part IV: Resistance. Rozmarin, Living in the Plural. Botticelli, The Politics of Identification: Resistance to the Israeli Occupation of Palestine. Harris, Dread is Just Memory in the Future Tense. Layton, Resistance to Resistance.

Adrienne Harris, Ph.D., is Clinical Associate Professor at the New York University Postdoctoral Program in Psychotherapy and Psychoanalysis, and an Associate Editor of Psychoanalytic Dialogues and Studies in Gender and Sexuality.

Steven Botticelli, Ph.D., is adjunct faculty, City College, CUNY. He is a contributing editor for Studies in Gender and Sexuality and maintains a private practice in Manhattan.