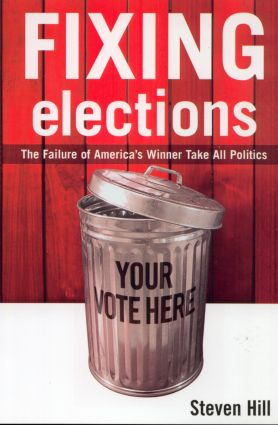 The Failure of America's Winner Take All Politics, 1st Edition

Fixing Elections shows our whole 18th-century Winner Take All political system, including the way we elect our legislatures. Steven Hill argues our geographic-based, Winner Take All political system is at the root of many of our worst political problems, including poor minority and majority representation, low voter turnout, expensive mudslinging campaigns, congressional gridlock, regional balkanization, and the growing divide between city-dwellers and middle-America.

"Here's the eye-opening news from Steven Hill's new book: our 'winner-take-all' electoral system is a mug's game that makes losers of us all. He explains why-convincingly. And he tells us what we can do about it." -- Hendrik Hertzberg, Senior Editor, The New Yorker

"Fixing Elections is the most important book on American democracy that has come out in many years." -- Michael Lind, author of Made In Texas: George W. Bush and the Southern Takeover of American Politics

"In this powerfully argued and engaging book, Steven Hill successfully demonstrates how our Winner-Take-All electoral system produces highly undemocratic results. His work should inspire serious and widespread discussion of alternative electoral arrangements that are far more democratic and have long been employed in almost all of the other advanced democratic countries." -- Robert A. Dahl, Sterling Professor Emeritus of Political Science, Yale University

"Fixing Elections is a provocative reminder that we desperately need to re-invigorate our democracy. By cataloguing the elements of the crisis facing our divided polity, from orphaned voters to a far-reaching political depression, Steven Hill shows how crucial it is to explore the unfairness of our electoral system's underlying structure rather than simply working to reform the mechanics of voting." -- Lani Guinier, Bennett Boskey Professor of Law, Harvard University

"What's wrong with politics in America? What explains our abysmal voter turnouts -- down, according to one international study, to 138th in the world, sandwiched between Botswana and Chad? Why are vast segments of the country political wastelands for one party or the other?Why are so many million voters "orphaned" in states where the candidates they prefer are likely never to win? Political analyst Steven Hill offers up a single answer in his new book, Fixing Elections --it's the winner-take-all system of elections." -- Neal Peirce, Houston Chronicle

"Steven Hill is making the case for real reform of America's decayed democracy -- changes that will actually give weight to every vote cast and begin the hard process of convincing Americans of every persuasion that their votes really can matter." -- William Greider, National Affairs Correspondent, The Nation

"For the past decade, Steven Hill's analysis, commentary and activism have helped shape pro-democracy work in the United States." -- Katrina vanden Heuvel

"As the pamphlet Common Sense was to the American revolution, so Fixing Elections could be to the movement for alternative voting systems in our day…It deserves the widest readership possible." -- Richard Winger, Ballot Access News

Steven Hill is co-founder and Associate Director of the Center for Voting and Democracy, a nonprofit organization promoting election reform. He frequently appears on radio and TV to discuss political issues, and his articles have appeared in dozens of national newspapers and magazines including The Nation, Salon, The American Prospect, The Boston Review, New York Daily News, Los Angeles Times, and The Washington Post.