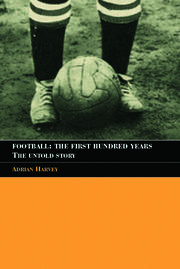 The story of the creation of Britain's national game has often been told. According to the accepted wisdom, the refined football games created by English public schools in the 1860s subsequently became the sports of the masses. Football, The First Hundred Years, provides a revisionist history of the game, challenging previously widely-accepted beliefs.
Harvey argues that established football history does not correspond with the facts. Football, as played by the 'masses' prior to the adoption of the public school codes is almost always portrayed as wild and barbaric. This view may require considerable modification in the light of Harvey's research. Football's First One Hundred Years provides a very detailed picture of the football played outside the confines of the public schools, revealing a culture that was every bit as sophisticated and influential as that found within their prestigious walls.
Football, The First Hundred Years sets forth a completely revisionist thesis, offering a different perspective on almost every aspect of the established history of the formative years of the game. The book will be of great interest to sports historians and football enthusiasts alike.

Introduction: Waiting for kick-off 1. What football was not: The history of Shrove football 2. Entertaining the elite: Football at the public schools and the universities 1555-1863 3. Football outside the public schools: From American indians to Origin of the Species 4. An epoch in the annals of sport: Britain's first football culture, Sheffield 1857-1867 5. Footballing Backwaters? London, the F.A. and the rest, 1860 to 1867 6. Football splits up but goes national: The creation of a national football culture 1868-1873 7. Kicking and carrying: The geographical distribution of sporting rules 1860-1873 8. Cups, leagues and professionals: Rugby and Association 1874-1901 9. Conclusions: The real history of the creation of modern football.