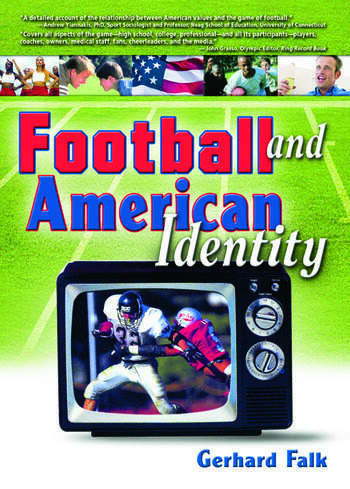 Learn the value of football to American society

No sport reflects the American value system like football. Visitors to the United States need only watch a game or two to learn all they need to know about the American way of life and the beliefs, attitudes, and concerns of American society. Football and American Identity examines the social conditions and cultural implications found in the football subculture, represented by core values such as competition, conflict, diversity, power, economic success, fair play, liberty, and patriotism. This unique book goes beyond the standard fare on football strategy and history, or the biographies of famous players and coaches, to analyze the reasons why the game is the essence of the American spirit.

Author Gerhard Falk, Professor of Sociology at the State University College of New York at Buffalo, examines football as a game, as a business, and as a reflection of the diversity in American life. Football and American Identity also addresses the relationship between football and the media, with much of the game’s income generated by advertising and endorsements, and examines the presence of crime in football culture. The book discusses the development of the game—and those involved in it—at the Pop Warner, college, and professional levels, examining the social origin of players, coaches, cheerleaders, and owners. In addition, Football and American Identity analyzes the game’s fans and their devotion to “their” teams, examines why Pennsylvania is considered the “mother” of American football, and looks at the National Football League and its commissioners.

Football and American Identity is an inside look at football as an American cultural phenomenon. Devoted and casual fans of the game, as well as academics working in sociology, will find this unique book interesting, entertaining, and thought-provoking.