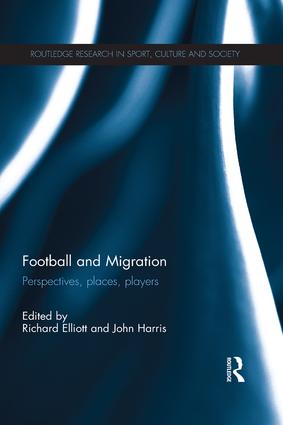 Football is an incredibly powerful case study of globalization and an extremely useful lens through which to study and understand contemporary processes of international migration. This is the first book to focus on the increasingly complex series of migratory processes that contour the contemporary game, drawing on multi-disciplinary approaches from sociology, history, geography and anthropology to explore migration in football in established, emerging and transitional contexts.

The book examines shifting migration patterns over time and across space, and analyses the sociological dynamics that drive and influence those patterns. It presents in-depth case studies of migration in elite men’s football, exploring the role of established leagues in Europe and South America as well as important emerging leagues on football's frontier in North America and Asia. The final section of the book analyses the movement of groups who have rarely been the focus of migration research before, including female professional players, elite youth players, amateur players and players’ families, drawing on important new research in Ghana, England, Haiti and the Dominican Republic.

Few other sports have such a global reach and therefore few other sports are such an important location for cross-cultural research and insight across the social sciences. This book is engaging reading for any student or scholar with an interest in sport, sociology, human geography, migration, international labour flows, globalization, development or post-colonial studies.

Richard Elliott is Associate Professor and Director of the Lawrie McMenemy Centre for Football Research at Southampton Solent University, UK. He received his PhD from Loughborough University. His expertise lay in the areas of globalisation and migration in football where he has published widely. Regularly consulted by the professional football industry, he has worked in conjunction with the Football Association, the Premier League, the Professional Footballers’ Association, the League Managers Association and professional clubs. He also provides expert opinion for the media, appearing in print, on radio and television in the UK and internationally

John Harris is Reader in International Sport & Event Management at Glasgow Caledonian University, UK where he also leads the Sport and Identities Research Cluster. He is author of Rugby Union and Globalization (Palgrave Macmillan, 2010) and has published work on numerous aspects of international football