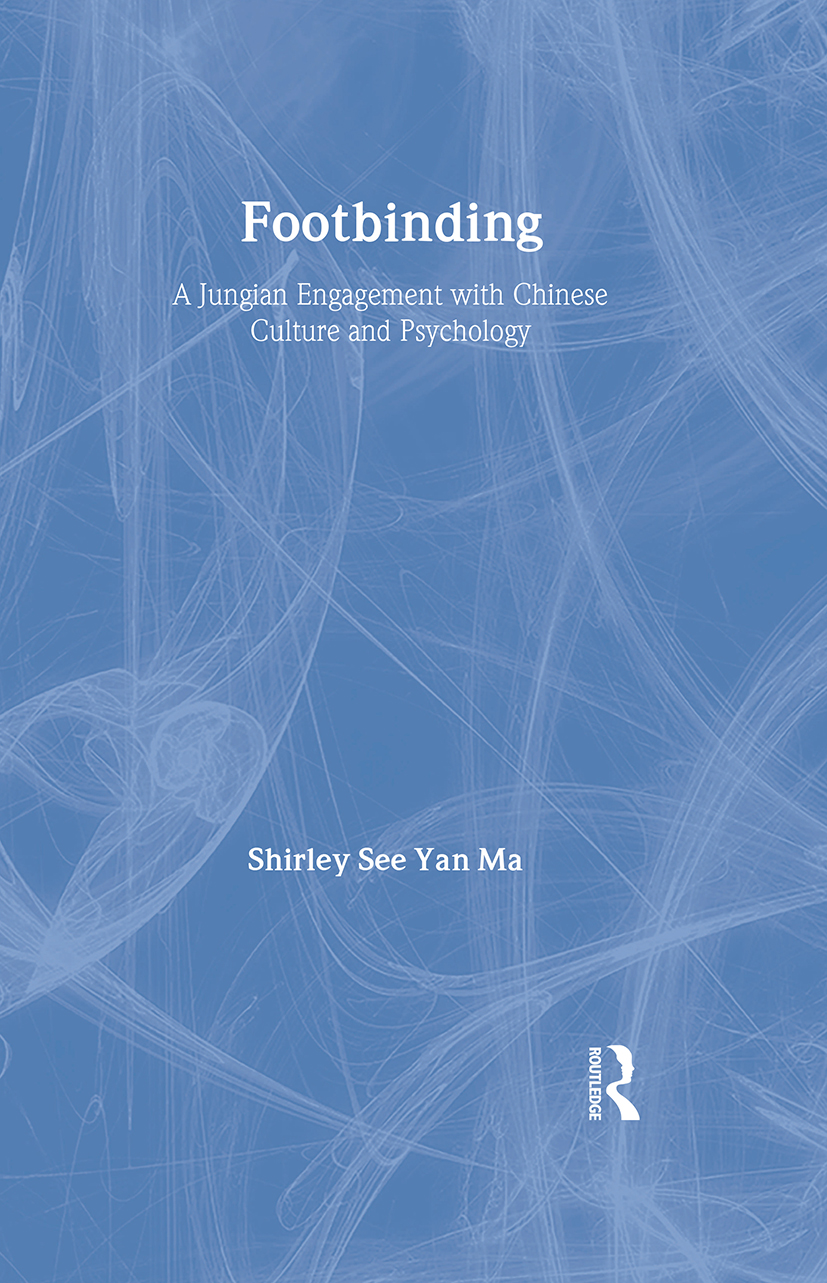 A Jungian Engagement with Chinese Culture and Psychology, 1st Edition

In this book Shirley See Yan Ma provides a Jungian perspective on the Chinese tradition of footbinding and considers how it can be used as a metaphor for the suffering of women and the repression of the feminine, as well as a symbol for hope, creativity and spiritual transformation.

Drawing on personal history, popular myths, literature, and work with clients, Footbinding discusses how modern women still symbolically find their feet bound through this ancient practice. Detailed case studies from Western and Asian women demonstrate how Jungian analysis can loosen these psychological bindings allowing the client to reconnect with the feminine archetype, discover their own identity and take control of their own destiny.

This original book will be of great interest to Jungian analysts looking for a new perspective. It will also be of interest to anyone studying Chinese culture and psychology.

"This pioneering work is an invaluable contribution to Analytical Psychology, as well as to studies in Culture, and Consciousness. It is exceptionally informed in its archetypal depth, and reveals the power of a symbol for psychological understanding across cultures." - Marion Woodman, From the Foreword

"I have a deep appreciation for the depth and scope of Footbinding: A Jungian Engagement with Chinese Culture and Psychology. It is fascinating to learn about footbinding and appalling to know of the pain that little girls endured, as they were slowly crippled to make them marriageable. Like female genital mutilation in Africa, footbinding in imperial China was done by mothers who themselves had endured this so that their daughters would be acceptable brides with "lotus feet," which measured 3 –4" in length and made walking or running normally impossible. In patriarchal societies, where daughters are shaped physically and psychologically to make good marriages, the crippling that results is symbolic. This book will provide important insights for women of Chinese ancestry and their therapists, especially, but it is applicable to women raised in families where the father is the most important person, and to women in the hierarchal or corporate world of masculine power. As Dr. Shirley Ma so effectively points out, when feminine qualities and women are devalued, footbinding then becomes a powerful metaphor." - Jean Shinoda Bolen,author of Goddesses in Everywoman and Urgent Message From Mother

"This remarkable book opens the door to a deeper appreciation of the struggles of Chinese women to be themselves, disclosing how the tools of their own emancipation have long lain in their own hands yet have often been misused to bind women to the expectations of others. The author shows that Chinese history and philosophy were never as firmly patriarchal as the West imagines, and she reveals that the strength of Chinese mythology, so often underestimated, lies in its images of the feminine as an agency that can survive and endure. How so destructive and limiting a practice as the binding of the feet of girls in order to realize an arbitrary aesthetic ideal for women took hold in Chinese society and survived for so long is the burden borne by the scrupulously honest author of this book, Jungian analyst Shirley Ma. Ma gives a sensitive, thorough, and fair account of footbinding’s history, but where her book really comes into its own is in its moving presentation of the work of Chinese women in analysis trying to discover how to let themselves be. In the midst of their efforts to set themselves loose psychologically from the double binds of their culture, Ma’s patients encounter the paradox that cultural complexes can both shield us from the difficult work of learning to be ourselves and at the same time hold the energy that is needed to move beyond the ways we have restricted our development to social goals that are too narrow. Skillful in her use of Jungian concepts, this compassionate therapist has given us a book about the therapeutic journey that is a healing experience to read." - John Beebe, past president of the C. G. Jung Institute of San Francisco, author of Integrity in Depth.

"Shirley Ma has written a moving account of her personal journey toward liberation and wholeness as a Chinese woman. It is a narrative that can touch the lives of women from many cultures with the power of healing encouragement to become themselves and all-that-they-can-be if they too become liberated from damaging habits of mind and the inner forces of repression." - Murray Stein, author of Jung's Map of the Soul

"Shirley Ma's Footbinding is one of those rare books that take you on a journey that is both mysteriously riveting and deeply moving. Her own story is fascinating enough, but tied to it are the vivid tales of courageous but often wounded women for whom both the metaphor and the actuality of footbinding stands as historical testimony to the endurance of the human spirit. The Jungian wellspring of reverence for the seemingly inchoate longings in all of us is beautifully delineated here." - John Fraser, author of The Chinese: Portrait of a People and Stolen China.

"A timely book, providing penetrating insights for women wrestling with the questions if they are bound for life or if they will be able to move beyond. This valuable Jungian contribution on feminine identity and creative transformation is particularly illuminating as Shirley Ma bridges East and West, culture and psychology, the personal and the collective." - Ursula Wirtz, Ph.D., Jungian Analyst, Zürich, Author of Seelenmord (Soulmurder).

"In this remarkable and groundbreaking study, Shirley Ma traces the history, from the ancient Zhou dynasty (1122 – 256 BC) to recent days, of the tradition of female foot binding in China. In so doing, she interweaves her personal and cultural reminiscences with Jungian oriented clinical cases from her private practice, to fashion a coherent discussion about the archetypal sources of the living embodiments of this cultural complex, as a metaphor for the suffering of women and the repression of the feminine. Along the way she traces the myths, legends, and fairy tales arising from the physical and psychic binding of women that can be used to release feminine strength and personal transformation. A notable, mind-opening and relevant study of a culture still yet on the threshold of Western sensibilities." - Hester McFarland Solomon

"This remarkable book explores the psychological basis for the practice of footbinding in traditional China, and shows how contemporary women are still confined by this archetypal pattern. Dr. Ma's analysis, both historical and clinical, is original and a fascinating read. She offers detailed case histories of women who have the courage to bring their psychic binding to consciousness, thereby finding their authentic standpoint and experiencing spiritual transformation." - Lucinda Sykes, Meditation for Health, Canada.

"Ma's book has taken the Jungian connenction to Chinese culture and psychology to an entirely new level. Through exploring the symbolic menaning of footbinding, Ma has opened up a new horizon in our understanding of Chinese feminist psychology, and I earnestly look forward to her innovative ventures into this area of Chinese psychology" - Catherine Sun, Asia Pacific Journal of Counselling and Psychotherapy, Volume 1, Issue 2, September 2010

"I found Ma’s Footbinding: A Jungian Engagement with Chinese Culture and Psychology highly enlightening… This book is a valuable addition to Jungian literature that is committed to exploring lasting cultural archetypes, with serious implications for women’s psychology not only in modern China but anywhere." - Manisha Roy, Jung Journal, Fall 2010

"In this important, clinically relevant, and well-documented book on footbinding, Dr. Ma explores the breadth and depth of Chinese history, mythology, fairytale, as well as philosophical underpinnings used to justify and understand the brutal and soul-crippling practice of foot-binding in imperial China. The book transported me back to those consciousness–raising living rooms during the during the 70’s resurgence of feminism." - Judith Cooper, Journal of Analytical Psychology, 2011

First Glimpse of the Golden Lotus. The Shang Empress-Fox and her Feet. The Confucian Way. A Pearl of Great Price. Xi Wang Mu: The Queen Mother of the West. Yexian: The Chinese Cinderella. Chiu Chin, the Beheaded Martyr. Julia Ching: A Journey from East to West and Back Again. Ruby and Her New Vision. Jade: Unbinding and Restoring Her Feet. Reflections on the Golden Lotus.

Shirley See Yan Ma is a Jungian analyst in private practice in Hong Kong and Toronto, Canada. She teaches Analytical Psychology in various cities in Asia, North America and in Zurich, Switzerland. She is an Honorary Assistant Professor of Psychology at the University of Hong Kong and founder/director of Jung Centre Hong Kong.