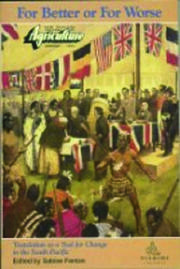 For Better or for Worse: Translation as a Tool for Change in the South Pacific

The essays in this book explore the vital role translation has played in defining, changing and redefining linguistic, cultural, ethnic and political identities in several nations of the South Pacific.

While in other parts of the world postcolonial scholars have scrutinized the role and history of translation and exposed its close relationship with the colonizers, this has not yet happened in the specific region covered in this collection. In translation studies the Pacific region is terra incognita.

The writers of this volume of essays reveal that in the Pacific, as in all other once colonized parts of the world, colonialism and translation went hand in hand. The unsettling power of translation is described as it effected change for better or for worse. While the Pacific Islanders' encounter with the Europeans has previously been described as having a 'Fatal Impact', the authors of these essays are further able to demonstrate that the Pacific Islanders were not only victims but also played an active role in the cross-cultural events they were party to and in shaping their own destinies.

Examples of the role of translation in effecting change - for better or for worse - abound in the history of the nations of the Pacific. These stories are told here in order to bring this region into the mainstream scholarly attention of postcolonial and translation studies.

For Better or For Worse: Contents
Introduction, Sabine Fenton, pp 1-9

Some fifty years ago historians viewed the Pacific Islanders' encounter with the Europeans as a 'Fatal Impact'. "From this time onward the islands were pawns in the great game of international rivalries" (Oliver 1961:97).  Colonized by the British, French and Germans, the Pacific Islanders were mostly portrayed as naïve victims of foreign exploitation and domination. This view of the effects of colonization is also shared by many postcolonial writers on translation. They have scrutinized and exposed the role translation played in the processes of colonization and termed the close relationship between both the "shameful history of translation" (Bassnett and Trivedi 1999:5). Today, however, many Pacific scholars recognize in their historic analyses the fact that the Pacific Islanders were not only victims but also played an active role in the cross-cultural events they were party to, helping to shape their own destinies. The writers of this volume of papers on translation in the Pacific are therefore putting forward a politics of double-inheritance. On the one hand, their essays provide evidence of the total transformation of the Pacific by the arrival of the Europeans. On the other hand, however, they also demonstrate the extent to which the changes were and still are today co-directed by the natives themselves

The Humpty Dumpty Principle at Work: The Role of Mistranslation in the British Settlement of Aotearoa. The Declaration of Independence and He Whakaputanga o te Rangatiratanga o nga hapü o Nu Tïreni, Margaret Mutu, pp 12-35

From 1840 to this day Mäori have protested that English immigrants to New Zealand were acting far in excess of the rights they had been afforded. Those rights derived from acknowledgement made by the King of England in 1836 of the paramount authority of Mäori chiefs in New Zealand as set out in He Whakaputanga o te Rangatiratanga o ngä Hapü o Nu Tïreni (the Mäori version of the Declaration of Independence) and the subsequent signing of Te Tiriti o Waitangi, a Mäori language treaty made between Mäori and the Queen of England. The rights conveyed included allowing the Queen of England to take responsibility for maintaining peace and good order amongst English immigrants while they lived under the paramount authority of Mäori chiefs as the rulers of their own country. Examination of the original nineteenth- century documents setting out these rights and conditions reveals that mistranslation has played a significant role in allowing the suppression of the protests of Mäori by English settlers. While the Mäori versions of official documents uphold the Mäori understandings, the English versions do not. The English versions convey the erroneous notion that Mäori were unsophisticated, child-like and desperately seeking English protection. Written histories of New Zealand almost all either disregard or refute the Mäori language versions of these documents and Mäori understandings of the nature of the Declaration and the Treaty. Oral traditions of many Mäori tribal groups around the country, on the other hand, have maintained these understandings. As a result Mäori continue to assert their sovereignty over New Zealand despite the severe disadvantages they now live under both numerically and in terms of all officially measured socio-economic indicators.

Survival by Translation: The Case of Te Tiriti o Waitangi, Sabine Fenton & Paul Moon, pp 37-61
The Treaty of Waitangi was signed in 1840 by a representative of the British Crown, and a translation of it into Maori by over 500 Maori chiefs. The Treaty is considered the founding document of the New Zealand Nation. However, over the years serious misunderstandings have emerged as to what had actually been signed. While in the English version Maori had ceded their sovereignty to the British Crown, no such fundamental cession was agreed to in the Maori version. In this article the Treaty of Waitangi and its translation are investigated in their role as a double-edged tool: first in the hands of a colonizing power conqueringa nation, and secondly in the service of the colonized redressing past wrongs. The article begins by outlining briefly the historical background and the context in which the translation occurred, followed by an analysis of the main areas of misunderstanding in the two texts. The article then demonstrates how throughout history the translation not only ensured the survival of the Treaty of Waitangi itself but also that it became the corner-stone of Maori restistance and the guarantor of their economic and cultural survival. The present day societal impact of the Maori resistance based on the translation is explored and some future trends are suggested.

Translating the Ancestors: Grey's Polynesian Mythology, John O'Leary, pp 63-88
Sir George Grey (1812-1898) is an important figure in the history of translation in the Pacific. His work as a translator, however, has been relatively little studied, despite the fact that his English-language version of Maori myths and legends, Polynesian Mythology (1855) exerted, and still exerts, a determining influence on how this Pacific mythology was and is perceived. In this article, Grey's intellectual and philological interests are described, his translation practices are discussed, and his book is analyzed in terms of other, earlier accounts of indigenous mythologies; also described are the book's intended audience, and Grey's treatment of his Maori-language source text, Nga Mahi a Nga Tupuna [The Deeds of the Ancestors] (1854). Special attention is paid to Grey's translation of the Hinemoa legend, which for complex historical and cultural reasons was extremely popular with Grey's mid-nineteenth-century European readers.

Interpreting as a Tool for Empowerment of the New Zealand Deaf Community, Rachel Locker McKee, pp 89-132

Interpreting has been an enabling mechanism in the New Zealand Deaf community's assertion of their identity and agenda as a linguistic minority. This chapter examines sociolinguistic impacts of interpreting and interpreters on the New Zealand Deaf-world over the period 1985 -2002, in which professional interpreting services have been available. Also considered are ways in which interpreting has the disempowering potential to create an illusion of access or independence that has not been actualised. As one of the first group of sign language interpreters trained in 1985, the writer bases the analysis on her involvement in the development of the profession and her observation of the Deaf/hearing interface since that time. Although written from an interpreter's point of view, the chapter also draws upon Deaf people's accounts of their experiences regarding interpreting.

Translation in New Caledonia: Writing (in) the Language of the Other The "Red Virgin", the Missionary, and the Ethnographer, Raylene Ramsay, pp 133-170

This study turns on the centrality of translation in New Caledonian culture. It traces the interaction between two cultures, European and Kanak, through the translation work of major figures: the translation of Kanak tales at the height of the colonial enterprise by Louise Michel, deportee from the Paris Commune; the pioneering work of the first French Protestant missionary, Maurice Leenhardt in the early twentieth century, and the contemporary work on texts in Paici and Cemuhi by the ethnographer Alban Bensa. More than half of the texts of indigenous Kanak oral literature exist only in translation. In its turn, the translation of these texts has influenced the emergence of literature by a settler population of European origin. We follow the contributions made by Michel, Leenhardt and Bensa to a translated and hybrid culture considering the distinctive value and particular character of the 'third spaces' created by very different modes of translation.

Decolonization by Missionaries of Government: The Tokelau Case, Tony Angelo & Tioni Vulu, pp 208-240
When three small and separate atoll communities of the tropical Pacific are required by international standards to develop a joint system of national government which can take over the central role of the colonial power, the task for translators is huge. It is demanding in terms of both vocabulary and culture. This paper concerns the translation endeavours of the people of Tokelau in the context of their decolonization. The paper uses a number of key Government documents written since 1980 to provide evidence that Tokelauan translators have been slow to adopt a consistent terminology for the new legal and political ideas, and that they have preferred to source the words of translation in the existing language. A consequence of the use of traditional words for the alien ideas of Western European style government has created some resistance to the social acceptance of the ideas because they are not understood or because the cultural resonance of the ideas in the Tokelauan words of translation is often at odds with the political concepts of the English source text.

In this article I will be concerned with explaining some of the difficulties of translating the poetry of Queen Sälote (QS) from Tongan into English. Tongan belongs to the Polynesian branch of the Austronesian language family. Along with Niuean, it is a daughter language of Proto-Tongic, one of the two major subgroups of Polynesian. The other subgroup is Proto-Nuclear Polynesian, to which belong all other Polynesian languages, including the Outlier Polynesian languages in Micronesia and Melanesia. Whenever difficulties in translation arose, I found it was mainly for either of two reasons: structural differences between Tongan and English - examples of these will be given in section 2 - and cultural differences or differences in cultural knowledge between the Tongan-speaking audience for whom the Tongan original was composed and the non-Tongan-speaking audiences for whom the translation was produced - examples of these will be given in section 3. In section 4 I present two translated poems and their commentary.