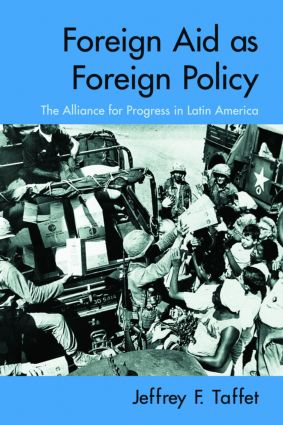 The Alliance for Progress in Latin America, 1st Edition

Foreign Aid as Foreign Policy presents a wide-ranging, thoughtful analysis of the most significant economic-aid program of the 1960s, John F. Kennedy’s Alliance for Progress. Introduced in 1961, the program was a ten-year, multi-billion-dollar foreign-aid commitment to Latin American nations, meant to help promote economic growth and political reform, with the long-term goal of countering Communism in the region. Considering the Alliance for Progress in Chile, Brazil, the Dominican Republic, and Colombia, Jeffrey F. Taffet deftly examines the program’s successes and failures, providing an in-depth discussion of economic aid and foreign policy, showing how policies set in the 1960s are still affecting how the U.S. conducts foreign policy today. This study adds an important chapter to the history of US-Latin American Relations.

"[Foreign Aid as Foreign Policy] is an outstanding book on an important topic. This book is destined to be the standard reference work on the [Alliance for Progress]. It is well researched, well written, and provides a compelling story of a failure that was not as noble as it seemed."

"Based largely on newly released U.S. government sources, Taffet’s clearly written study is a valuable—and timely—contribution that sheds new light on the most ambitious U.S. effort to reshape Latin America in its own image."

"Foreign Aid as Foreign Policy brilliantly makes the failed Alliance for Progress of the 1960s part of our ‘usable past,’ because it warns against the temptation of letting short-term politics corrupt long-term development. This book should be read not only by those interested in Latin America but by all students of international affairs."

"Foreign Aid as Foreign Policy provides a compelling analysis of the Alliance for Progress. Taffet shows how and, importantly, why the original objectives of the Alliance were not met. Anyone interested in US-Latin American relations will profit from reading this exemplary study."

"Taffet has written a path-breaking, long overdue history of the Alliance for Progress that is sure to become the standard reference on the topic. Lucid and balanced, Foreign Aid as Foreign Policy reveals the ironies and ideals of foreign aid, showing why—in the service of realpolitik—it was such a blunt and unwieldy tool."

—Elizabeth Cobbs Hoffman, author of All You Need is Love: The Peace Corps and the Spirit of the 1960s

"Foreign Aid as Foreign Policy should now be regarded as the most important work on the history of the Alliance for Progress."

"This is an outstanding book on an important topic… It is destined to be the standard reference work on the topic. It is well researched, well written, and provides a compelling story." --The Journal of American History