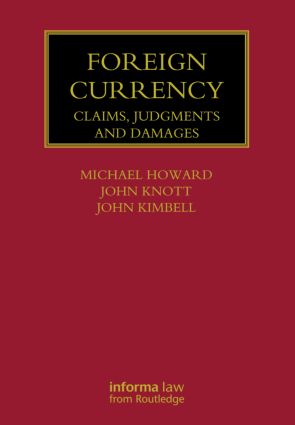 Currency fluctuation, currency wars and even potential currency collapse (the Euro, the Bitcoin) are all risks that commercial parties must consider and guard against.

This book gathers together in one volume all the information and advice practitioners are likely to need when advising on, advancing or defending claims involving a foreign currency element.

The determination of the proper currency (or currencies) of a claim often has a dramatic effect on the level of a court judgment or arbitration award that is ultimately obtained. It is, therefore, vital for practitioners to accurately assess claims which involve a foreign currency element.

This book is an invaluable and essential resource for all lawyers involved in international commerce, but will be of particular interest to those engaged in international finance, commodity transactions, international shipping and transport, and the insurance of assets and liabilities abroad.

"Those who practise in this country need guidance in navigating the tricky waters that The Despina R unleashed. This excellent book provides that guidance."

The authors "have been uniquely well placed to meet the challenge of analysing what is a perplexing body of jurisprudence, and to suggest principled answers to currency issues that have not yet been the subject of judicial decision. They consider not merely claims in contract and tort, but every type of claim that might raise an issue in relation to a foreign currency."

The Rt Hon. The Lord Phillips of Worth Matravers, KG, PC,

"An excellent text in a field of great complexity… The text is comprehensive in seeking to cover a wide range of areas in which foreign currency issues may become relevant, and has been prepared by authors who are plainly well-suited to their task. The text will appeal to solicitors and barristers who need to argue these matters, but it also contains much discussion of real academic value."

"On any view, this is a most remarkable book… a well-researched, masterly study of a difficult subject. The authors tackle head-on practical problems concerning foreign currency claims in disparate areas of the law and, where appropriate, happily stick their necks out in expressing their views. Praise be to the brave. The result is a unique book which provides excellent and invaluable guidance for anyone concerned with claims in a foreign currency."

Foreword, The Rt Hon The Lord Phillips of Worth Matravers

Chapter 3: Sterling: its Historical Role, and the Decline that Led to a Change in the Law

Chapter 5: The Change in English Law Introduced by Miliangos and its Forebears

Chapter 9: The Law of Trusts and Fiduciaries

Michael Howard QC is a barrister at Quadrant Chambers in London, where he acts in relation to international commercial disputes and specialises in all aspects of maritime law. He is an arbitrator and the Leader of the English Admiralty Bar. He is also a Visiting Professor of Law at Tulane University, Louisiana; and he has given expert evidence on English law before a number of foreign courts.

John Knott is a consultant at the London head office of international law firm Holman Fenwick Willan, having previously headed up their Admiralty Claims department. He has authored numerous articles dealing with foreign currency claims; and he is a contributor to the Damages title of Halsbury's Laws of England.

John A. Kimbell QC is a barrister at Quadrant Chambers in London and a solicitor (Rechtsanwalt) in Hamburg. His practice encompasses maritime law, aviation, insurance and re-insurance in addition to general commercial litigation and arbitration. He acts as a commercial arbitrator in London and Hamburg.

In this series you will find expert commentary and analysis on wide-ranging aspects of commercial law including commercial agents, the law of deceit, and financial crisis management. All the titles are dedicated to meeting the needs of commercial law specialists.

On any view, this is a most remarkable book. As stated in the preface, its aim isto address the practical problems that arise in litigation with an internationaldimension as a result of the existence of different currencies in different countriesor areas. That might be thought to be a somewhat modest objective. But thelandscape traversed by the book is exceptionally broad (including contract, tort,unjust enrichment/restitution and insolvency) and the terrain is often rocky withoccasional high mountains and deep ravines. So it is perhaps unsurprising that thebook has had, as the authors confess, a “long gestation”, its origins apparentlydating back to the decision of the House of Lords in The Despina R [1979] A.C.685; [1979] 1 All E.R. 421 when two of the authors acted on opposing sides—JohnKnott for the appellant defendants and Michael Howard for the successfulrespondent claimants. That great battle took place nearly 40 years ago. These twonow well-seasoned combatants have obviously buried the hatchet in producingthis book together with John Kimbell. The result is a tour de force.This is a well-researched, masterly study of a difficult subject.The authors tackle head-on practical problems concerning foreign currency claimsin disparate areas of the law and, where appropriate, happily stick their necks outin expressing their views. Praise be to the brave. The result is a unique book which
provides excellent and invaluable guidance for anyone concerned with claims in a
foreign currency.

Formerly a Judge of the High Court of Justice, Queen’s Bench Division