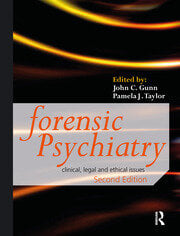 1. Introduction  2. Criminal and civil law for the psychiatrist in England and Wales  3. Mental health and capacity laws including their administering bodies  4. Legal arrangements in the rest of the British Isles and Islands  5. Forensic psychiatry and its interfaces outside the UK and Ireland  6. Psychiatric reports for legal purposes in England and Wales  7. The psychosocial milieu of the offender  8. Genetic influences on antisocial behaviour, problem substance use and schizophrenia: evidence from quantitative genetic and molecular genetic studies  9. Violence  10. Disordered and offensive sexual behaviour  11. The majority of crime: theft, motoring and criminal damage (including arson)  12. Disorders of brain structure and function and crime  13. Offenders with intellectual disabilities  14. Psychosis, violence and crime  15. Pathologies of passion and related antisocial behaviours  16. Personality disorders  17. Deception, dissociation and malingering  18. Addictions and dependencies: their association with offending  19. Juvenile offenders and adolescent psychiatry  20. Women as offenders  21. Older people and the criminal justice system  22. Dangerousness  23. Principles of treatment for the mentally disordered offender  24. Forensic mental health services in the United Kingdom and Ireland  25. Offenders and alleged offenders with mental disorder in non-medical settings  26. Ethics in forensic psychiatry  27. Deviant and sick medical staff  28. Victims and survivors  Appendix 1: ECHR  Appendix 2: MHA 1983  Appendix 3: Experts’ Protocol  Appendix 4: Hippocratic Oath  Cases cited

"Though penned primarily for those with more advanced knowledge of forensic issues (including those practicing within the justice system), this work might prove useful for anyone interested in the various intriguing and complicated challenges in the subspecialty of forensic psychiatry."