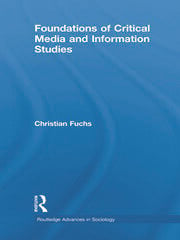 This book provides an excellent introduction to the study of media, information technology, and information society, making it a valuable reference tool for both undergraduate and postgraduate students of subjects such as Media Studies, Sociology of Media, Social Theory, and New Media.

Christian Fuchs is Professor and Chair for Media and Communication Studies at Uppsala University's Department of Informatics and Media Studies. He is also board member of the Unified Theory of Information Research Group (Austria) and editor of tripleC (cognition, communication, co-operation): Journal for a Global Sustainable Information Society. He is author of many publications in the fields ICTs and society, media and society, information society studies, and critical theory.

‘The information and communications media are absolutely central in the new globalized world of the twenty-first century. To understand their role requires a renewed assessment of the way we analyse and understand the media, information and communications. Christian Fuchs has performed an invaluable task in reconsidering classic Marxist theory and political economy to help understand critically the place of the internet, the ‘knowledge economy’, and class in ways that afford illuminating insight into contemporary crises and capitalist development.’ – Peter Golding, Pro Vice-Chancellor (Research and Innovation), Northumbria University, UK

‘Christian Fuchs is a demanding and able young scholar who insists on the relevance of old traditions of thought. Foundations of Critical Media and Information Studies is a forceful reminder that we forget at our peril the legacy of Marx – not to mention Theodor Adorno, Hebert Marcuse, Oskar Negt… indeed, the range of Critical Theory. For those who believe the Internet, iPhone, web 2.0 and web 3.0 changes everything, Dr Fuchs’ treatise will make for a very sobering read.’ − Frank Webster, Head of Sociology Department, City University London, author of Theories of the Information Society, 3rd edition (2006)

‘Foundations of Critical Media and Information Studies by Christian Fuchs is a superior and sophisticated introduction to critical analysis of communication. It provides an accessible yet deeply informed understanding of media history and theory. In particular, Fuchs has a remarkable facility with Marxist theory and economics, and he makes a compelling case for their singular importance to our times. After reading this book, no student or scholar in communication will look at globalization, the Internet and participatory democracy the same again. This book should be required reading for all who care about media and democracy.’ – Robert W. McChesney, co-author, The Death and Life of American Journalism

‘Christian Fuchs systematically and relentlessly disposes of the false starts and pseudo critique fettering not only media theory, but critical social theory more broadly. Reinstalling the Marxian components vital to rigorous thought, he establishes the conceptual groundwork necessary for a political understanding of communicative capitalism.’ − Jodi Dean, Professor of Political Science at Hobart and William Smith Colleges, and author of Blog Theory and Democracy and other Neoliberal Fantasies

‘Foundations of Critical Media and Information Studies provides a well argued and theoretically sound critique of the march of the one-dimensional, instrumentalist adoption of modern ICT that reinforces existing structures of domination and economic and political injustices. With its theoretically and empirically grounded critical perspective, the book is an important contribution to the literature on social media, information, ICT and information society. The book shows how classical critical theories of Marx, Marcuse, Horkheimer, Adorno and others can help us understand the developments in information economy and society and envisage alternative roles that media and ICT can play. It also reflects on celebratory and uncritical hailing of the Internet, web 2.0 and social networking as democratizing technologies, dominant in the public media. I recommend this book to anyone interested in the Internet, social media and ICT and how we can use them to make a better world.’ − Dubravka Cecez-Kecmanovic, Professor of Information Systems, Australian School of Business, The University of New South Wales, Australia

‘This is a courageous and important work of critical theory for the 21st Century. In an era of small-scale and local theory, Christian Fuchs’s book stands out in its willingness to make overarching claims about the failings and pathologies of capitalist society. Thankfully, Christian Fuchs has met the timely challenge of developing a critical theory of the information society that matches the scale and reach of this society itself.’ – Mark Andrejevic, Postdoctoral Fellow at the Centre for Critical and Cultural Studies, University of Queensland

‘This book skillfully combines theoretical rigour with precise empirical research to provide an outstanding guide to the critical analysis of media and information. It is must reading for those interested in social theory, informational capitalism and the uncertain future of the global economy.’ – Vincent Mosco, Canada Research Chair in Communication and Society, Queen’s University, Canada