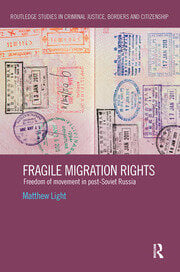 The Soviet Union comprehensively governed the mobility of its citizens by barring emigration and strictly regulating internal migration. In the aftermath of the Soviet collapse, the constitution and laws of the new Russian Federation appeared to herald a complete break with the repressiveness of the previous government. Russian law now proclaims the right of Russian citizens and residents to move around their country freely.

This book examines how and why this post-Soviet legal promise of internal freedom of movement has been undermined in practice by both federal and regional policies. It thereby adds a new dimension to scholarly understanding of the nature of rights, citizenship, and law enforcement in contemporary Russia. Most contemporary works focus on the attempts of developed Northern countries to regulate migration from the global South to the global North: here Matthew Light examines the restriction of migration within Soviet and post-Soviet Russia, providing a comprehensive view into an area rarely explored within migration scholarship.

develops a comprehensive theoretical framework to analyse this complex subject. It is essential reading for students and academics from a range of disciplines including criminology, human rights, migration studies, and political science.

Matthew Light is Associate Professor of Criminology and Sociolegal Studies at the University of Toronto, Canada.

"Fragile Migration Rights is a must-read for scholars of contemporary migration and migration policy. Focusing on an area of the world that has received woefully little attention in the immigration literature, it is descriptively rich, analytically astute, and beautifully written."

Kitty Calavita, Chancellor's Professor Emerita of Criminology, Law and Society at the University of California , USA.

"Matthew Light does a masterful job in interpreting and explaining Russia’s byzantine migration policy. He begins with his own personal experiences with Russian migration authorities, something that all of us Russian researchers have encountered, before explaining the history of migration controls during the Soviet and post-Soviet eras in Russia. The study will appeal to those interested in a better understanding of contemporary Russian society and to those interested in the migration policy of an emerging migration destination."

"In this comprehensive study of migration policy in post-Soviet Russia, Light demonstrates convincingly that the state falls well short of its stated commitment to human rights and the rule of law. On the contrary, in the realm of migration policy the Russian state is disorderly, fragmented, and frequently corrupt. Light shows how a combination of national conditions and policies, widely varying regional practices, and arbitrary behavior by local officials has made not only immigrants, but Russian citizens seeking to relocate within their own country, vulnerable to a crazy quilt of rules and procedures. Well-written and meticulously researched, and with illuminating comparisons to the United States and other countries, Fragile Migration Rights is an important and welcome contribution."

"This book makes an important and timely contribution to the study of migration and migration policies in post-Soviet Russia. Building on original research in several Russian regions, the book developed a sophisticated four-level model for explaining the "post-Soviet paradox" - Russia's restrictive migration policy towards post-Soviet immigrants despite Russia's demographic crisis - as well as puzzling variation in receptivity to immigrants among comparable Russian regions. Light's book is especially valuable for embracing and uncovering complex causality, including informal power and institutional relations, informing Russian immigration policies at the federal and local levels, and for showing how "pervasive informalization" of Russian migration policies results in a migration regime that has distinct features not present in either liberal capitalist states or in authoritarian states elsewhere."