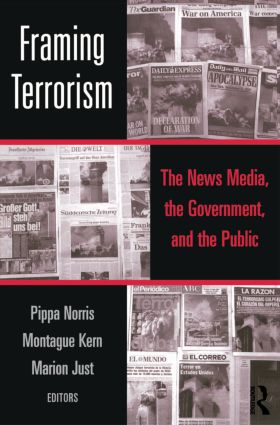 The News Media, the Government and the Public, 1st Edition

Terrorism now dominates the headlines across the world-from New York to Kabul. Framing Terrorism argues that the headlines matter as much as the act, in political terms. Widely publicized terrorist incidents leave an imprint upon public opinion, muzzle the "watchdog" role of journalists and promote a general one-of-us consensus supporting security forces.

"What we think we know about terrorism depends in part on how the issue is framed. This book provides a fascinating combination of theory and cases about what the press tells us. Read it to find out what you really know!" -- Joseph S. Nye, author of The Paradox of American Power

"This is an extremely timely and important book that brings together some extremely important research about the news media and terrorism. The international perspective is especially welcome and I am sure that this will become an important resource for both scholars and students." -- Gadi Wolfsfeld, Professor of Political Science, Hebrew University

"At a time when terrorism has redefined US foreign policy and the balance between civil liberties and security, one cannot think of a more important subject than the media's portrayal of terrorism. Framing Terrorism is a major contribution toward developing a thoughtful response to the threat of terrorism." -- Steven Livingston, Senior Research Fellow, Center for American Politics and Public Policy, University of Washington