France and Fascism
February 1934 and the Dynamics of Political Crisis 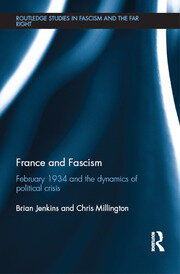 France and Fascism: February 1934 and the Dynamics of Political Crisis

France and Fascism: February 1934 and the Dynamics of Political Crisis is the first English-language book to examine the most significant political event in interwar France: the Paris riots of February 1934. On 6 February 1934, thousands of fascist rioters almost succeeded in bringing down the French democratic regime. The violence prompted the polarisation of French politics as hundreds of thousands of French citizens joined extreme right-wing paramilitary leagues or the left-wing Popular Front coalition. This ‘French civil war’, the first shots of which were fired in February 1934, would come to an end only at the Liberation of France ten years later.

The book challenges the assumption that the riots did not pose a serious threat to French democracy by providing a more balanced historical contextualisation of the events. Each chapter follows a distinctive analytical framework, incorporating the latest research in the field on French interwar politics as well as important new investigations into political violence and the dynamics of political crisis.

With a direct focus on the actual processes of the unfolding political crisis and the dynamics of the riots themselves, France and Fascism offers a comprehensive analysis which will be of interest to undergraduate and postgraduate students, as well as scholars, in the areas of French history and politics, and fascism and the far right.

Brian Jenkins, now retired, was most recently Senior Research Fellow at the University of Leeds.

Chris Millington is Lecturer in History at Swansea University.

‘Wide European perspectives, impressive scholarship, bold conclusions. This outstanding study meticulously reconstructs the context and dynamics of the Parisian riots, showing convincingly that France was not immune from the political violence of Fascism.’

Rod Kedward, Emeritus Professor of History, University of Sussex, and author of La Vie en Bleu: France and the French since 1900

‘Brian Jenkins and Chris Millington’s book offers a highly original and engaging treatment of a hitherto neglected, yet vital chapter in French history, and should be required reading for anyone seeking to understand the dynamics of 1930s Gallic politics and society, the roots of the Vichy Regime, and indeed transnational trends across the European extreme Right during the interwar era.’

'This is an important book on an important subject. 6 February 1934 was in many ways the defining event of the turbulent decade of 1930s France, but no one has approached the subject with the scholarly rigour of Jenkins and Millington. The book is essential reading for all students of inter-war France.’

'Jenkins and Millington provide us with a remarkable and authoritative account, by far the best to date, of the development and dynamics of this historic episode, which left an indelible mark on twentieth-century France. In the process, with rigour and precision, they refute traditional interpretations of these events. The lessons of this book probably apply well beyond this period of history.’

'The 6 February riots were a turning-point in modern French history, yet they have been invoked far more than they have been studied. Confronting the myth-making of the 1930s and more recent interpretations of le six février head on, Brian Jenkins and Chris Millington set this pivotal event in a broader French and European context. This engaging and accessible work will fascinate scholars and students of modern European history and politics.'