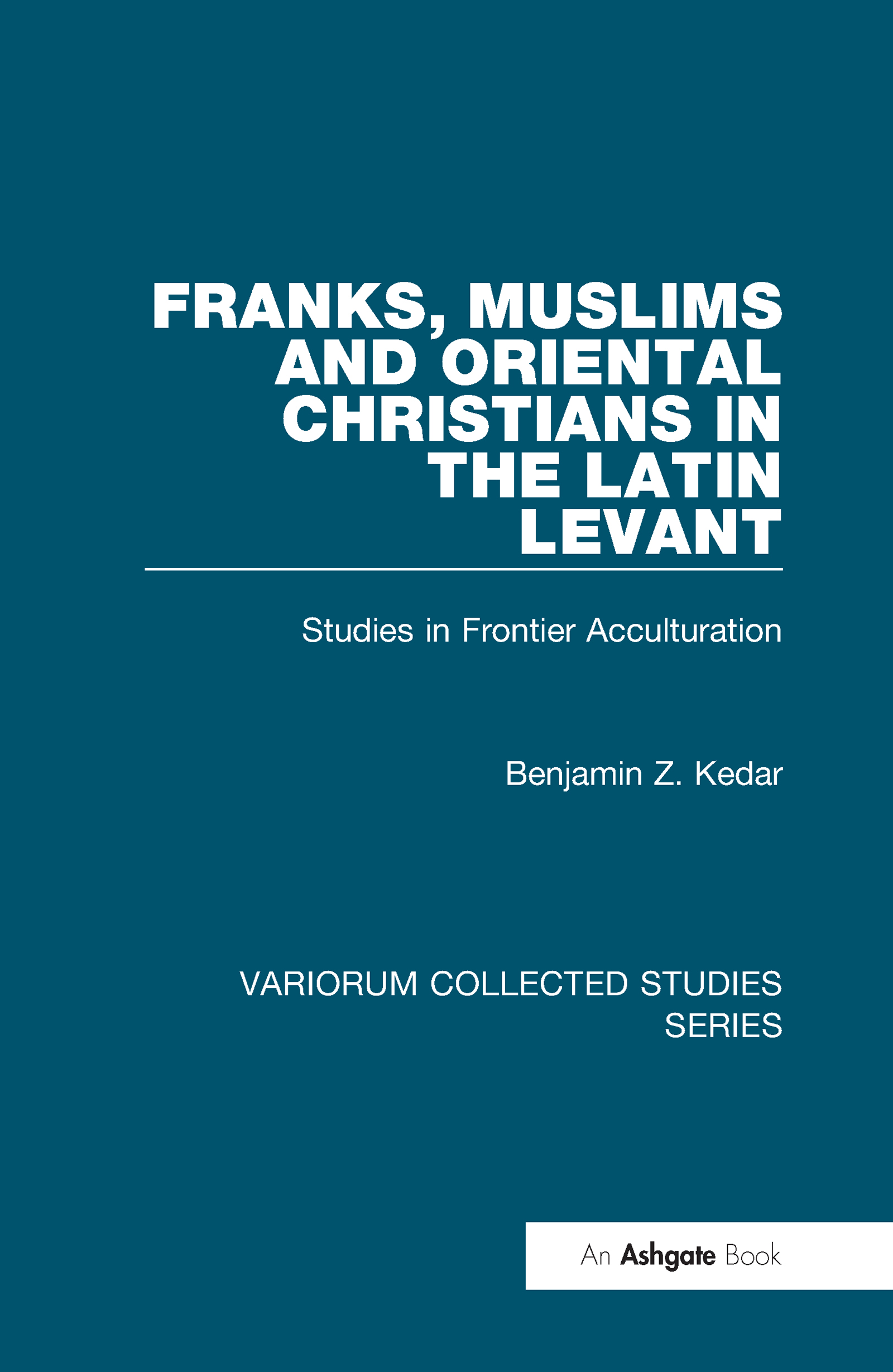 Franks, Muslims and Oriental Christians in the Latin Levant

Steven Runciman characterized intellectual life in the Frankish Levant as 'disappointing'; Joshua Prawer claimed that the Franks refused to open up to the East's intellectual achievements. The present collection, the second by Benjamin Kedar in the Variorum series, presents facts that require a modification of these still largely prevailing views. The earliest laws of the Kingdom of Jerusalem were influenced by Byzantine legislation; medical routine in the Jerusalem Hospital, unparalleled in Europe, had counterparts in Oriental hospitals; worshippers of different creeds repeatedly converged; multi-directional conversion recurred time after time. Several articles deal with groups that did abstain from intercultural contacts: Muslim villagers, Frankish clerics and hermits. One article dwells on the asymmetry of Frankish and Muslim mutual perceptions. The volume concludes with studies of specific locations: one argues that Acre was considerably larger than hitherto assumed, another compares its Venetian and Genoese quarters and attempts to locate the remains of a main street, a third reconstructs the history of Caymont.

Contents: Preface; On the origins of the earliest laws of Frankish Jerusalem: the canons of Nablus, 1120; The Tractatus de locis et statu sancte terre ierosolimitane; Some new sources on Palestinian Muslims before and during the Crusades; Muslim villagers of the Frankish Kingdom of Jerusalem: some demographic and onomastic data; Latins and Oriental Christians in the Frankish Levant 1099-1291; Multidirectional conversion in the Frankish Levant; A Western survey of Saladin's forces at the siege of Acre; La Via sancti sepulchri come tramite di cultura araba in Europa; Intellectual activities in a holy city: Jerusalem in the 12th century; A 12th-century description of the Jerusalem Hospital; Raising funds for a Frankish cathedral: the appeal of Bishop Radulph of Sebaste; Sobre la génesis de la Fazienda de Ultra Mar; A second incarnation in Frankish Jerusalem; Benvenutus Grapheus of Jerusalem, an oculist in the era of the Crusades; The intercultural career of Theodore of Antioch, (with Etan Kohlberg); Croisade et jihad vus par l'ennemi: une étude des perceptions mutuelles des motivations; The outer walls of Frankish Acre; Un nuovo sguardo sul quartiere genovese di Acri, (with Eliezer Stern); A vaulted east-west street in Acre's Genoese quarter?, (with Eliezer Stern); The Frankish period: 'Cain's Mountain'; Index.

Benjamin Z. Kedar is Director of the Institute for Advanced Studies, The Hebrew University of Jerusalem, Israel.