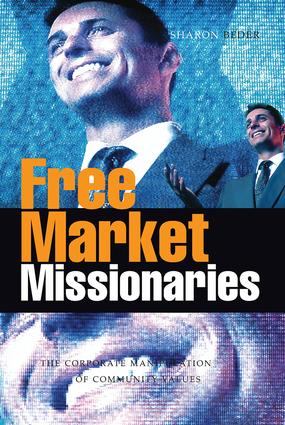 In her recent book Suiting Themselves, bestselling author Sharon Beder exposed how the global corporate elite have brazenly rewritten the rules of the global economy to line their pockets. In this new book she trains her sights on the insidious underbelly of this global trend to show how they have also orchestrated a mass propaganda campaign to manipulate community values and convince us that their interest - co-opting and controlling all of us in the name of the free market - is in our interest. During the 20th century, business associations coordinated mass propaganda campaigns combining 20th century American PR methods with revitalized free market ideology from 18th century Europe. The aim was to persuade people to eschew their own power as workers and citizens, and forego their democratic power to restrain and regulate business activity. Sophisticated corporate-funded think tanks augmented these campaigns in the 1970s and 1980s, promoting free enterprise and business-friendly policies. Thesefree market missionaries now seek to change individual and institutional values through bolder strategies such as expanding share ownership and manipulating wider public concerns. In each case the goal is the same: the triumph of business values over community values. Beder‘s is an intellectual call to arms: challenge the ideology of the free market missionaries or be converted to it.

'Sharon Beder has taken the taboo subjects of propaganda and censorship in free societies and exposed their insidious threat.' John Pilger 'Beder's analysis is comprehensive, steely and clinical. She lifts the lid on an elaborate tapestry of lies, deceit, intimidation and destruction.' Harold Pinter '[Beder is] the scourge of the world's environment-damaging corporates and public relations bosses.' Evening Post, New Zealand '[Beder] is the master of the soundbite and is a communications Rottweiler… [She] exposes conspiracies and scandals of the highest dimensions.' Michael Pollak and Margaret MacNabb, Hale & Iremonger

Professor Beder is a qualified professional engineer and worked in this field until a career shift into researching and teaching environmental politics. She has held a number of appointments at Australian universities over the past two decades - most recently as professor in the School of Social Sciences, Media and Communication at the University of Wollongong in Australia. Her previous books include Global Spin: The Corporate Assault on Environmentalism.